So it appears that we were slightly out in our belief that poker superstar Phil Ivey would return to the Global Poker Index (GPI) 300 following four months outside the rankings. 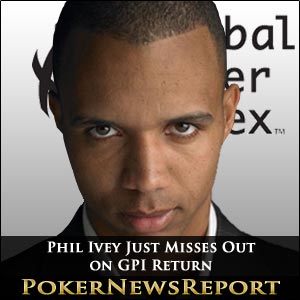 So it appears that we were slightly out in our belief that poker superstar Phil Ivey would return to the Global Poker Index (GPI) 300 following four months outside the rankings.

The eight-time World Series of Poker (WSOP) bracelet winner did, however, come very close to breaking into the top 300, only falling short because his $2,058,948 pay day – the 36-year-old’s biggest ever live tournament cash – for winning the AUD$250,000 buy-in Super High Roller could not be counted towards his ranking points as the event did not reach the minimum required 21-player field for qualification.

Just 16 players paid the huge buy-in, meaning that American Ivey – although picking up some vital GPI points from his 12th place and $102,947 in the AUD$10,000 buy-in main event in Melbourne – hasn’t quite cracked the GPI just yet as he is 35 points behind New York State newcomer Kevin Calenzo, who sits in 300th place on 1050.97 points.

Californian Ivey did collect 359 points from his super high roller success at the Crown Casino, but that score was not enough to take him back into the top 300 for the first time since September – although it does appear that it is only a matter of time before the star’s name is back on that exclusive list.

The former Team Full Tilt Poker Pro might have started off 2012 with a bang – following a barren 2011 – but he’ll be concerned that he has been mentioned specifically, along with other high-profile poker pros, in a critical statement made by Groupe Bernard Tapie (GBT) lawyer Behnam Dayanim.

The French investment company’s solicitor stated in an interview with online gaming journal Gaming Intelligence that several stars, including Ivey, Erick Lindgren, Mike ‘The Mouth’ Matusow, David Benyamine and Barry Greenstein, are causing problems with Full Tilt’s sale to GBT as they have still to repay debts owed to the troubled poker room of up to $20 million.

We’ll see if this latest revelation hinders Ivey’s progress and level of play in future events, but for now he will still be thrilled to have started the year off with a success.

With the top seven places remaining unchanged on the GPI, Canadian Sorel Mizzi’s climb of 15 places into 12th spot on 2,273.85 points is more significant than the fact American Erik Seidel remains at number one on 3,069.84.

The Las Vegas-based Canuck – who had been fifth on the rankings back in late October, had dropped out of the top 10 by the end of November and was outside the leading 20 last week – made his big move up the rankings after finishing second at the Aussie Millions AUD$5,000 buy-in No-Limit Hold’em Heads-Up event for $41,179 and 183 points.

The San Jose native has seen his ranking improve dramatically recently, following on from his low of dropping to 300th back at the start of last month.

However, a third-place finish in the $10,000 buy-in No-Limit Hold’em main event of the European Poker Tour (EPT) PokerStars Caribbean Adventure for $755,000 back on January 13 took Jaka to 145th place, while his runner-up spot in Melbourne gave him an extra 210 points to see him break into the top 100.

Incredibly, since his massive slump in January, Jaka has collected 522 points to leap up 209 places on the GPI.

Let’s take a quick look at the top 10 anyway, even if it doesn’t make particularly riveting reading.

As previously mentioned, eight-time WSOP bracelet winner Seidel – who has topped the GPI for a record 14 of its 32-week existence – remains top on 3,069.84 after adding 16 points to his score.

Erik Seidel Holds On To Number One Spot

Still, as he recorded numerous high finishes during last year, Seidel has retained his place at the top of the pile, with big scores in Periods 1 and 2 ensuring that, for now, Mercier can’t close the gap sufficiently to oust his fellow American.

In fact, Seidel has four Period 1 scores that count towards his GPI ranking, including a runner-up spot at the inaugural main event – a $20,000 buy-in No-Limit Hold’em Six-Handed tournament for $604,330 – of the Epic Poker League (EPL) back in August, as well as a fourth place for $184,100 at the EPL’s $20,000 buy-in No-Limit Hold’em Eight-handed main event, also at The Palms Casino Resort in Vegas the following month.

Incredibly, just three players have been top of the GPI during its eight months, with Team PokerStars Pros Mercier and Grospellier – who fill spots two and three right now – the others behind Seidel.

Hollywood-based pro Mercier has recorded 12 weeks at number one, while Vandoeuvre-lès-Nancy’s Grospellier managed six weeks at the top, but Seidel still holds an 83.77-point lead over his countryman while there is a 230.61-point gap between the leader and the French star.

It’s again unlikely that there will be any major movements inside the top 10 next week as the €5,300 buy-in main event of the EPT Deauville was only completed today.

However, numerous side events also took place at the Casino de Deauville tournament and ought to encourage some place changes further down the list.

While the leading seven places are filled by the same names as last week, there was some movement inside the top 10 as Florida’s Matt Waxman (2,400.18 points) climbed one spot above Brooklyn’s Vanessa Selbst – who dropped 15.01 points – into eighth.

Mike McDonald Back in Top 10

McDonald replaced French-Canadian Jonathan Duhamel after the 2010 WSOP main event champion slipped six places to 16th on 2,239.66 points after just one week inside the top 10.

While London-based Swede Martin Jacobson (2258.73) lost three spots as he fell from 12th to 15th, he still remains above Duhamel.

Eleven players entered the top 300 on the latest rankings, with five of those pros – Calenzo, Sebastian Winkler, Grant Levy, Connor Drinan and Daniel Chevalier – making the list for the very first time.

Canada’s Daniel Idema made the most impressive return to the rankings after his eighth place in the Aussie Millions main event for $128,684 propelled him into 158th on 1,323.23 points.

Therefore, a total of 11 pros dropped off the list, with Swedish star David Sonelin showing the most dramatic exit from his previous position of 247th.

The Norrköping native’s best result arrived last April, when he took down the  €10,000 No-Limit Hold’em High Roller event at The Everest Poker ONE  in Monte Carlo for $108,352.

Unfortunately, for Sonelin, that event didn’t meet the 21-player requirement to be included in the GPI’s points scoring system after the Scandinavian outlasted a field of just 17 starters.

The relegation of Germany’s Finger and Swiss Huber might have been particularly tough to take as they had only just made their debuts the previous week.

California’s Ho will also be disappointed after her three-month stay in the 300 has ended. However, with no cashes to count towards her Period 1 scores, Ho – who made her debut on the GPI on October 24 last year – has slipped away.

It’s never all negative on the GPI, though, as you well know, so we also saw some impressive climbers – and none more so than the leap of 121 places and 434 points attained by Vegas pro Jason Koon.

The American outdid every other player to shoot up to 68th on 1,663.88 points following some good recent results, including his biggest ever live cash with the $271,950 he pocketed for finishing fourth in the PCA’s $25,000 No-Limit Hold’em Eight-Handed High Roller event back on January 12.

He added $36,032 a few weeks later in Melbourne with 27th in the Aussie Millions main event, so ensuring that he has three Period 1 scores.

Incidentally, Finland’s Juha Helppi – who is a former poker dealer – climbed 18 places to 20th, after almost three months outside the top 20.

The 34-year-old Helsinki star gained 258 points and $94,296 following his second place at the €10,000 No-Limit Hold’em High Roller event at the Euro Finals of Poker in Paris last week.

American Tom Marchese also zoomed up the rankings from 74th to 45th as he attempts to reclaim his high point of fifth back on September 5.

The New Jersey pro has started that climb well with 14th place in the PCA’s $5,000 Eight-Handed No-Limit Hold’em event.

On the flipside, several pros suffered huge falls on the latest rankings list, with Belgian Kenny Hallaert falling 80 places to 256th on 1,122.33 points after his sixth in the EPT Deauville €5,000 No-Limit Hold’em main event for $210,962 at the end of January last year dropping into Period 3.