Phil Ivey is Back at the Felt… In Macau

Phil Ivey is back playing live poker – but, instead of the USA, he decided on journeying overseas to Macau for his comeback. 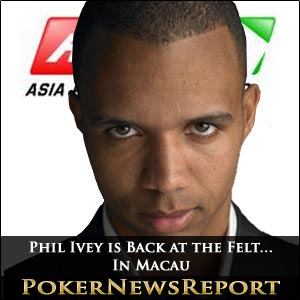 Phil Ivey is back playing live poker – but, instead of the USA, he decided on journeying overseas to Macau for his comeback.

The eight-time World Series of Poker (WSOP) bracelet winner vanished from the poker scene soon after the events of Black Friday back in April, before issuing a statement the following month saying he was preparing to sue Tiltware, the marketing and software firm that provides online poker website Full Tilt Poker.

Ivey was highly critical of Full Tilt Poker’s failure to repay their online account customers after the US Department of Justice (DoJ) indictment of several online poker sites, including PokerStars and Absolute Poker.

The 35-year-old also added that he had decided to boycott this summer’s WSOP in Las Vegas, leaving the event without one of its major stars, as he did not believe it was appropriate or fair to compete in the series when others could not make the journey to Sin City.

While Ivey withdrew the suit on June 30, he did stick to his decision to boycott the WSOP – much to the disappointment of millions of poker fans worldwide.

Recently, however, rumours had been circulating that the star poker player had arrived in Macau, most likely to take part in some high stakes cash games.

That suspicion was altered today, though, when news trickled down through the grapevine that Ivey had signed up for this year’s staging of the $6 million guaranteed PokerStars Asia Pacific Poker Tour (APPT) Macau main event as part of season five.

These rumours appeared unfounded as Ivey was nowhere to be seen as level 2 started. However, just as time ticked away on that level, Ivey made his way through the Casino Grand Lisboa to take his seat for Day 1a of the event.

As would be expected, the atmosphere in the room changed somewhat, with those already playing in the main event thrilled to see the man many consider to be the world’s best player stacking his chips at a live event for the first time since March.

He wasn’t the only late arrival, though, with Russian Team PokerStars Pro Alex Kravchenko also joining in the third level of play. The first Day 1 field hit the 269 mark when all entrants were accounted for.

But, maybe now that he’s back, we’ll see much more of the legend in the near future.

Of course, it was great to see the headphone-wearing Ivey back at the felt, but he didn’t appear in any mood to chat and his opponents seemed happy with this when leaving the American to immerse himself in music.

Ivey did allow a smile or two to cross his face, but it was almost all about building his stack on the first day of the $27,600+$2,400 buy-in main event in Macau.

OK, he might not have lit up the room with his scintillating conversation, but it’s still great to see Ivey playing again.

With Ivey not getting involved in many big pots, it was good to eventually witness him flex his poker muscles as the final level of the day approached its close.

Both then checked before the 5♣ arrived on the river. Ivey’s opponent made a 7,300 bet in attempt to collect the pot, but the WSOP star then put the opener all-in.

As numerous railbirds gathered, however, in the hopes of seeing Ivey embroiled in a large pot, his opponent folded.

Ivey ended the day on 51,200 chips in 16th place, no doubt poised to quietly make his move during Day 2 on Friday.

Su moved atop the leaderboard close to the end of play when he check-raised for an extra 9,700 on a flop of 8♦ 9♦ 6♦ after his opponent had bet 6,000. Su showed the K♠ after taking the pot when his opponent folded following his strong play.

Additionally, Team PokerStars Pro Raymond Wu, of Taiwan, sits down in 11th place on 65,800 chips, while Kravchenko is situated in 20th place on 40,000 after the opening day.

All in all, though, it’s a big welcome back to Mr Ivey. We’ve missed you…