Superstar Phil Ivey is in with a shout of his ninth World Series of Poker (WSOP) bracelet after making his fifth final table in Las Vegas this summer. 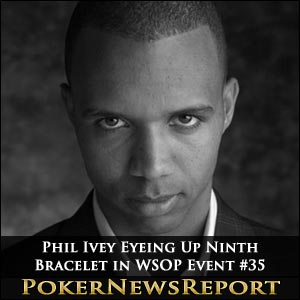 Superstar Phil Ivey is in with a shout of his ninth World Series of Poker (WSOP) bracelet after making his fifth final table in Las Vegas this summer.

The 35-year-old Phil Ivey will, obviously, be making all the headlines as he aims to close the gap on all-time series leader Phil Hellmuth’s 12 bracelets. But it is quite an amazing feat to have even made the final table of the $2,500 buy-in Mixed Hold’em (Limit/No-Limit) event #35 – particularly as he started late due to his fourth final table appearance just hours earlier.

Monday night saw Ivey battle it out with some of the best in poker to claim fifth place and $99,739 from the $10,000 buy-in H.O.R.S.E. event #32, so meaning he began this latest tournament slightly late.

However, Ivey – who has already garnered $551,234 in prize money from the 43srd annual WSOP – ran his stack up to finish the second day in seventh place on 169,000 chips at the Rio All-Suite Hotel & Casino.

Ivey will, though, start way behind the chip leader, Joep van den Bijgaart, of the Netherlands, as he holds 605,000 entering the final day. Still, if there’s one player who knows how to play a short stack, it is Ivey – so, with the extra motivation of trying to win bracelet number nine, expect a cracking finale to this tournament as nine players eye up the $210,107 first prize.

Certainly, Ivey will have to fear Belgian pro Michael Gathy – who is in third place on 418,000 chips – as he will be aiming to collect a second gold bracelet of this series after winning the $1,000 buy-in No-Limit Hold’em event #21 for $440,829 in his first ever WSOP cash.

Just 87 players started Day 2 after the field was cut back from its original 393 – who created a prize pool of $894,075 – with another 78 entries hitting the rail. However, 45 places are to be paid, so – after almost 90 minutes of bubble play – we finally had our unfortunate bubble boy in Dario Sammartino.

Brazilian Akkari – a one-time bracelet winner – exited after three-bet shoving with 8h-8c into Canadian Erik Cajelais’ {Kd] K♥, which held for the knockout, while another bracelet winner, Englishman James ‘Flushy’ Dempsey, hit the rail in 11th place for $12,964 when his K♠ J♥ failed to overcome the A♠ K♥ of UK-based American Salman Behbehani.

The final elimination of Day 2 saw Vegas-based Jeremy Ausmus also pick up $12,964 in 10th place. Ausmus had been left crippled when losing a huge pot to the trip kings of New Mexico’s Samuel Golbuff, before exiting in the very next hand to Vegas’ Chris Tryba.