Poker pro Phil Ivey claims that a flaw in the casino’s card decks gave him a distinct edge. 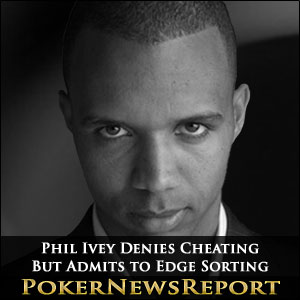 Poker pro Phil Ivey claims that a flaw in the casino’s card decks gave him a distinct edge.

In August of last year, poker superstar Phil Ivey, otherwise known as the Tiger Woods of Poker, went on a massive heater. Not at poker, but at a game called Punto Banco. Ivey, who is notorious for his high stakes antics, claims that over the two night session, he was able to identify flaws in the cards that granted him a vast statistical edge. Due to this edge, he was able to accumulate mountains of chips.

However, Ivey claims that in no way, shape or form did he cheat. Unfortunately, representatives of Crockfords Casino beg to differ. Accusing him of operating a scam, Crockfords claims that Ivey was accompanied by a beautiful, female Chinese associate (known only as Kelly) who is proficient at identifying the design flaws.

Furthermore, the casino notes that Ivey and his mysterious colleague kept requesting that the deck of cards be changed. It is believed that they did this until they identified a deck that was improperly cut. According to representatives of the casino:

Kelly would ask the dealer to reveal each card in turn by lifting the edge furthest from the dealer so that Kelly could identify whether the card was a seven, eight, or nine – the key cards in Punto Banco.

The way edge sorting works is relatively simple. Once the player recognizes a distinctive edge on one of the cards, he commits the value of that card to memory. The next time he sees that card on top of the deck, he knows how to act. For instance, in Punto Banco if the player knows that the next card is going to be a 7, 8 or 9 he’ll bet the maximum and likely win.

Ivey does not deny the allegations made by the casino that he used edge sorting to his advantage. However, he maintains that it was the casino’s fault for not properly inspecting their cards, and not his for exploiting their mistake. Therefore what he did was in no way illegal or a violation of the casino’s rules.

Crockfords initially agreed to give Ivey his winnings, but has since reneged upon their agreement, and have proceeded with an investigation. Ivey did receive his initial buy-in back, but none of his profits. This prompted the 37-year-old pro to pursue legal action against the casino in May.

Shortly thereafter, the casino would publicly respond to Ivey’s lawsuit, claiming that Ivey stacked the odds in his favor.

Whether or not Ivey’s funds will be fully restored is still in question, but what is known is that his case against Crockfords raises several questions regarding the nature of player advantages and casino exploitation.