Andy Frankenberger has secured event #17 at the World Series of Poker (WSOP) – and in the process spoiled Phil Ivey’s chance of more bracelet glory in Las Vegas. 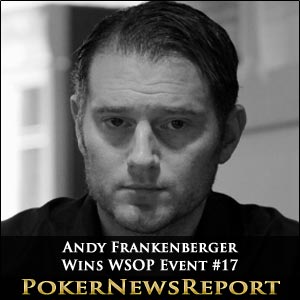 Andy Frankenberger has secured event #17 at the World Series of Poker (WSOP) – and in the process spoiled Phil Ivey’s chance of more bracelet glory in Las Vegas.

In what was a fantastic $10,000 buy-in Pot-Limit Hold’em tournament, the final table was stacked with quality players, while the event-ending heads-up also didn’t disappoint as New York’s Frankenberger ultimately overcame eight-time WSOP champion to pick up his second bracelet, as well as $445,899.

Many poker fans and commentators have been critical of Frankenberger’s play, but it is hard to argue with two gold bracelets – especially after producing a brilliant heads-up display to win the title after he had started three-handed play with only eight big blinds!

However, once Ivey had sent Hollywood’s Eslami to the rail in third place when the former’s 8♥ 8♣ held on a A♠ 4♠ 9♣ 6♥ A♦ board to beat the latter’s K♥ Q♣, heads-up play began with the rivals’ chip stacks almost even.

Having battled hard to stay alive when three-handed, Frankenberger now took on Ivey as the latter attempted to secure his ninth WSOP bracelet in front of a packed Amazon Room of the Rio All-Suite Hotel & Casino.

Frankenberger Doubles Up On Bracelets

Of course, the majority of the gathered railbirds were there to see if 36-year-old Ivey could stay in touch with record-setting Phil Hellmuth – who took down event #18 for his 12th bracelet – but it was not to be as former stocks trader Frankenberger showed his skill to make it two WSOP titles.

The final hand saw 39-year-old Frankenberger raise to 300,000 and Ivey make the call. The flop came A♠ 5♦ 4♥ and Ivey checked, only for Frankenberger to bet 130,000. However, Ivey then raised the pot and Frankenberger swiftly called in what was becoming a defining moment on the event.

Ivey showed 7♦ 6♦ for an open-ended straight draw, while Frankenberger revealed A♥ J♦ for top pair. Frankenberger – who pocketed $599,153 for winning last year’s $1,500 buy-in No-Limit Hold’em event #28 – was on the verge of his second bracelet in successive years.

The turn came 5♠ to change nothing, while the 5♣ river confirmed Frankenberger as champion. How will his critics react now? That’s two bracelets in two years, with this one coming against the man many believe to be the greatest poker player of all time.

Ivey will be disappointed, of course, but he played brilliant poker throughout an event that attracted 179 players to create a prize pool of $1,682,600, with $275,559 going to the runner-up.

However, after 10 levels of play, the money bubble did burst, with WSOP regular Farzad Bonyadi the unfortunate bubble boy in 19th place. One more elimination arrived after that as French Triple Crown winner Bertrand ‘ElkY’ Grospellier cashed in 18th place for $23,876.