Phil Ivey Blasts Back Into GPI 300 With Wonderful WSOP

The WSOP didn’t feel quite right last year without the presence of Phil Ivey – but he’s returned with a bang for the 43rd staging of the festival. 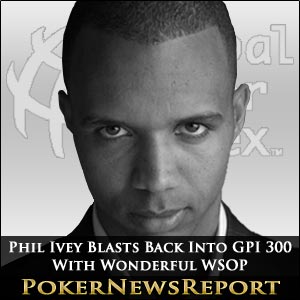 The World Series of Poker didn’t feel quite right last year without the presence of Phil Ivey – but he’s returned with a bang for the 43rd staging of the festival.

The 36-year-old former Full Tilt Poker Pro has already recorded three final table finishes at the Rio All-Suite Hotel & Casino in Las Vegas – with the first two of those scores sending the superstar zooming back into the top 100 on the Global Poker Index (GPI) 300.

Eight-Time Bracelet Winner On The Up

If that wasn’t impressive enough, the eight-time WSOP bracelet winner will climb even higher – possibly into the top 30 – when the next rankings list is revealed after Ivey also pocketed $136,046 for third spot in the $5,000 buy-in Omaha Hi-Lo Split-8 or Better event #24.

Phil Hellmuth, meanwhile, climbed 19 spots to make 20th on 2135.55 points after enjoying a fantastic first few weeks at the WSOP. The 47-year-old from Wisconsin had already made the money in three events before he added a record-setting 12th gold bracelet – as well as $182,793 – to his collection by winning the $2,500 buy-in Seven-Card Razz event #18.

Hellmuth – who now lives in Palo Alto in California – had dropped down to 63rd on the GPI before the World Series kicked off in Vegas, but his stellar displays have given his Period 1 score a massive boost.

And, much like Ivey, ‘The Poker Brat’ will climb even higher up the rankings once his fourth place finish for $134,056 in event #32 is added to his Period 1 results.

But there wasn’t much movement inside the top 10 of the GPI, with Bertrand ‘ElkY’ Grospellier (2,894.87 points) remaining on top for a seventh successive week to actually extend his lead over second placed fellow Team PokerStars Pro Jason Mercier (2,702.47) to 192.4 points.

The London-based Frenchman also finished sixth for $68,738 in the $3,000 buy-in No-Limit Hold’em Six-Max event #23 at the Rio so will add some handy points to his Period 1 scores on the GPI to extend his lead even further over American Mercier.

John Monnette Zooms back Into Top 300

Incidentally, California’s John Monnette – who has already bagged a bracelet by winning the $5,000 buy-in Seven-Card Stud event #10 for $190,826 – took the runner-up spot in event #32 in the Rio for $279,206 and will also see his ranking shoot up again when his score for this tournament is added to Period 1.

Unfortunately, with so much movement further down the rankings, two dozen other pros have fallen off the rankings, including Barny Boatman, Daniel Alaei, Fabian Quoss, Randy Dorfman, Rob Akery, Tyler Bonkowski and Ted Lawson.