Phil Ivey Back in Sin City For 43rd WSOP

American superstar Phil Ivey is back in Las Vegas for the 43rd annual World Series of Poker (WSOP) – having last year boycotted the festival. 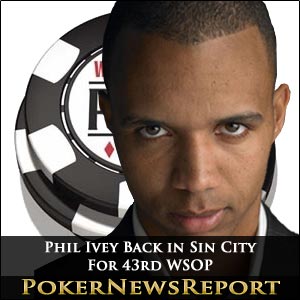 American superstar Phil Ivey is back in Las Vegas for the 43rd annual World Series of Poker (WSOP) – having last year boycotted the festival.

The eight-time WSOP bracelet winner stayed away from the 2011 series, citing his disappointment and anger with beleaguered poker room Full Tilt Poker at their failure to repay millions of dollars to customers after the events of Black Friday, when the US Department of Justice (DoJ) shut down several [geolink href=”https://www.pokernewsreport.com/online-poker-rooms”]poker rooms[/geolink] – including PokerStars and Absolute Poker – in relation to charges of illegal gambling, money laundering and bank fraud on April 15 last year.

However, having not played at the WSOP since 2010, the 36-year-old who once represented Full Tilt as a member of their pro team is back in Sin City at the first opportunity after he signed up to the opening open tournament, the $1,500 buy-in No-Limit Hold’em event #2, at the Rio All-Suite Hotel & Casino.

Reckoned to be the leading all-round poker player in the world today, Ivey was sorely missed at last year’s WSOP. But organisers will be thrilled to see him line up for this competition – and it is surely a sign that the New Jersey native will be playing a major role in the upcoming series.

The dark days of April 2011 might be in the past – although we are still waiting for the US government to act on legalising online poker – but the controversy surrounding Full Tilt most certainly isn’t, with customers still unable to access their frozen accounts and many of Ivey’s counterparts, including FTP directors Howard Lederer and Chris ‘Jesus’ Ferguson, having been charged on accounts of defrauding those unhappy players of over $400 million.

Ivey – who has never been mentioned as a co-conspirator and has seemingly emerged unscathed from the legal wrangle that is still running – returned to poker last November when playing in the PokerStars Asia Pacific Poker Tour (APPT) Macau main event.

Can Ivey Secure Another Bracelet?

Although unsuccessful there, Ivey was back on form in Melbourne when he secured the Aussie Millions AUD$250,000 buy-in No-Limit Hold’em Challenge event for $2,058,948 in January.

Ivey made his return to live US tournaments back in February when he played at the $10,000 buy-in No-Limit Hold’em LA Poker Classic (LAPC) main event, where he was eliminated in 55th place as the money bubble boy!

But it’s great to see the legend back in Vegas for the WSOP. Can he add a ninth bracelet to his collection this year? I wouldn’t be surprised.