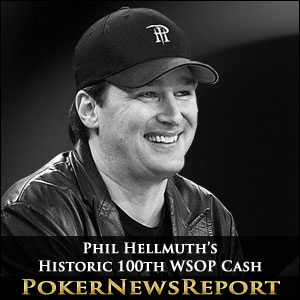 When the bubble burst at Event #5 €2,200 No-Limit Hold’em at this year’s WSOPE, Phil Hellmuth became the first player in poker history to bank 100 career cashes, an historic feat that will likely not be trumped for years to come.

Two Main Event titles, thirteen bracelets, 100 cashes, 25 years – these are the numbers that sum up Phil Hellmuth’s legendary poker career in a nutshell. Erik Seidel ranks second on the all-time WSOP cashes list with 80. And while 80 cashes is certainly nothing to sneeze at, it might take Seidel another five years or more for him to even think about eclipsing the 100 mark. Seidel also cashed in Event #3.

Even more impressive, 13% of the time Hellmuth cashed in a WSOP event, he won the tournament. Seven other players have a better cash-to-win percentage than Hellmuth, but most of them were in their prime when tournament fields were a fraction of the size they are today. For instance, Doyle Brunson has 10 bracelets and 36 cashes (27.8% cash-to-win rate), but most of his bracelets were won before 2000. Presently, the 80-year-old rarely participates in more than a few scattered events.

Hellmuth, on the other hand, is all over the place. The brash 49-year-old superstar from Palo Alto can be found at almost every major tournament series, and plays a seemingly infinite amount of WSOP events each year. Admittedly, the game has caught up with him to a degree, but as proven by his two bracelet wins in the past year, which included a WSOPE Main Event title, Hellmuth can still tangle with the best of them.

Some analysts say that the only player capable of one day overtaking Hellmuth is the legendary Phil Ivey. At 37, Ivey already has nine bracelets and 52 WSOP cashes. And although he doesn’t seem quite as focused as he once was, the superstar did win five of his bracelets in the post-Moneymaker era. He’s also well-versed and talented in almost all poker formats, boasting bracelets in PLO, H.O.R.S.E, 7-Stud and mixed events. Shockingly, he has yet to win a NL Hold’em bracelet.

Unfortunately, Phil would not make it to Day 3 of Event #3. After pondering making a hero call on the river with 8♠6♠ on a 5♣2♦8♦5♦3♦ board, Phil elected to fold. His opponent Ariel Celestino showed a 7♣, leaving Phil to wonder whether his fold was correct. Shortly afterwards, he got the rest of his chips in holding 6♣6♥ only to be looked up by Celestino’s 7♠7♥. The sevens held and Phil was eliminated short of the final table.