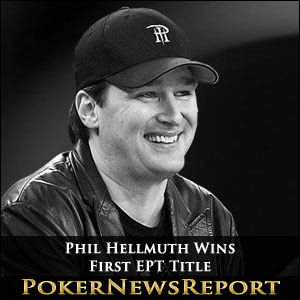 Incredibly this was only Hellmuth´s second-ever cash in a PokerStars EPT tournament (Hellmuth picked up a little pocket money for a fourth place finish in a side event at this year´s PokerStars Caribbean Adventure) despite the “poker brat” having racked up more than $15 million in live poker earnings in a career that extends over twenty-five years.

Even his participation in the event was a surprise, for although Hellmuth had indicated that he was on his way to London to play in the EPT Main Event, his plane arrived yesterday morning and he went straight to the Grand Connaught Rooms in Covent Garden rather than check into his hotel.

No Sleep till Bedtime!

Claiming that he was using a variation of Daniel Negreanu´s “food clock” trick to beat jet lag by drinking for nine hours, Hellmuth read on Twitter that Jason Mercier had just entered the Open Faced Chinese event. Hellmuth decided to “hop into” the tournament and several hours later was proudly being photographed behind his first-ever EPT winner´s trophy.

In addition to Jason Mercier, the event attracted a field of 21 – including well-known poker professionals Barry Greenstein, Dan O´Brien and Daniel Weinman. Only five players got paid in the event – Greenstein doubling up his buy-in with a fifth-place finish, with the full result as follows:-

One event that passed under the radar for many people due the clash with Day 1A of the EPT Main Event was the £2,200 buy-in UKIPT High Rollers (not to be confused with the £50,000 buy-in EPT Super High Roller that was won by Martin Finger). The event may have stayed under the radar had it not been for the fact that Vanessa Selbst eventually saw off Max Silver in the heads-up to pick up the £76,070 first prize.

Other UKIPT Results to Note

In the Ladies Tournament, twenty-one entered or re-entered the £330.00 buy-in event, with American player Kelly Saxby beating Friends of PokerStars´ Charlotte Van Brabander in the heads-up to collect the £3,660 first prize and winner´s trophy. A disappointed Van Brabander collected £2,530 for finishing second – and remains tied with Phil Hellmuth as having won only one EPT trophy (Van Brabander´s was for the Ladies event at EPT Berlin 2012).