Phil Hellmuth has secured his record-breaking 12th World Series of Poker bracelet – and in some style, too, besting a stellar final table in event #18 in Las Vegas. 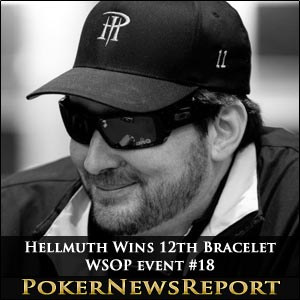 Phil Hellmuth has secured his record-breaking 12th World Series of Poker bracelet – and in some style, too, besting a stellar final table in event #18 in Las Vegas.

With the field reduced to just 18 players for the third and final day of this event, Hellmuth faced a tough field, with the final table at the Rio All-Suite Hotel & Casino’s Pavilion Room including six gold bracelet winners with a combined total of 20 titles.

Hellmuth ultimately defeated Vegas-based Don Zewin in a heads-up clash that saw the runner-up collect $113,024 – but there are other numbers that will matter more to the champion, particularly the two-bracelet lead he now holds over closest rivals Doyle Brunson and Johnny Chan.

It is also unlikely that this victory will be his last at the WSOP – so expect more chatter about how incredibly good he is over the next few weeks and months. Still, it certainly wasn’t about the money last night, with Hellmuth stating: This is the first tournament in my life I have no idea what the prize money is. I don’t know what first place is.

‘It’s All About The Bracelet’

However, once informed of the prize, a delighted Hellmuth added: That’s not bad. I was hoping for $425,000, but it’s all about the bracelet.

The only real surprise, following Hellmuth’s three runner-up spots at last year’s series, was that his record-setting victory did not come in some form on Hold’em, with the champ having secured his previous 11 bracelets in Limit, Pot-Limit and No-Limit. Razz is not really his game, yet this will probably be his most famous success – until the next one, that is.

They traded chips during a two-hour battle, but when the end came, it came quickly. The final hand saw Zewin all-in and the cards turned over after fourth street, with Hellmuth receiving a 10 on seventh street to make an A-2-4-10-J, meaning Zewin required an ace, deuce, four, five, seven or eight. However, he paired his nine, looked up and said: You win.

Incidentally, Zewin was also present when Hellmuth secured his first gold bracelet back in 1989, with the former finishing third as the legend began his path to poker immortality.

Hellmuth’s victory also emphasises his dominance as the WSOP’s all-time leader in cashes on 89 – which is 14 more than second placed Men Nguyen.

Main Events Winners Out on Day 2

But the most disappointed player would have been China’s Xuan Liu. Down to 33 players, only one more had to go before the money bubble was burst. Unfortunately, Liu became the bubble girl, with Mexico-based American Jaime Lezama the beneficiary as he exited in 32nd for $4,885.

However, this event will only really be remembered for Hellmuth’s incredible victory, although it will be interesting to see how Ivey responds after losing his own heads-up battle in the race to win the $10,000 buy-in Pot-Limit Hold’em event #17.