Phil Hellmuth Wants To Know What You Think of Him! 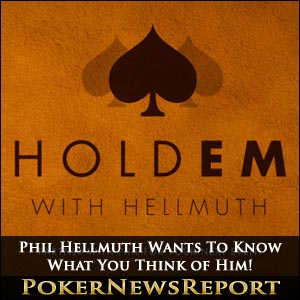 The 11-time World Series of Poker (WSOP) champion should certainly garner scores of comments after asking poker enthusiasts to provide him with their opinions, so maybe it’s time to check out PhilHellmuth.com and let the great man know what you think – before the forum section and/or the website’s server reach critical and melt down!

There’s not a whole lot to see just yet – with the site only being launched yesterday – but there is, of course, a welcome page, as well as sections detailing the 47-year-old American’s lifestyle, sports and poker projects. Oh, and we can’t forget the renowned philanthropic side to his nature.

There’s A Lot More to ‘The Poker Brat’

Hellmuth isn’t just a volatile character; he has a soft side, too. Witness the $17.5 million he has raised for charities over the years – and that’s only a small percentage of the $100 million he aims to raise over his lifetime. More on that later.

He stated that you are going to love my new site, while also stressing that it is meant to be a place where you can share great stuff with fellow fans, as well as gain exclusive access into the world of yours truly.

Of course, Hellmuth can’t do anything by half, so has produced a short introductory video – which is available on YouTube here  – to entice poker fanatics to sign up and take an active part in how the site develops.

Meanwhile, as many of you might know, Hellmuth has run a charity poker tournament for the past two years close to Christmas in his hometown of Madison in Wisconsin – and this year will no different as the Hold’em with Hellmuth Celebrity Poker Event makes a welcome return.

This year’s event has, however, been moved to Saturday, August 18, with tournament co-ordinator Lindsay Huebner stating that they believe the change of date will be great as it should hopefully allow more people to come, being that’s it’s not the weekend before Christmas.

Fans can expect another great line-up for this latest charity event, which will be held at the Alliant Energy Center’s Exhibition Hall, with the likes of 2007 WSOP Europe champ Annette Obrestad and Scott Ian – the rhythm guitarist with American thrash metal group Anthrax – as well as 2002 Winter Olympics speedskater champion Casey FitzRandolph and stars of the latest season of hit TV show ‘The Amazing Race’, Dave and Rachel Brown, already confirmed to be joining Hellmuth at the tables.

Stars Will Turn Up Once Again

There will once again be a silent auction and a raffle, as well as poker, food and fun, so expect the great and the good turn up to help fund the Agrace HospiceCare – which is a non-profit organisation specialising in offering emotional and spiritual guidance to patients who possess physical limitations.

For additional information on the event, visit agracehospicecare.org or take a trip to holdemwithhellmuth.com.