Phil Hellmuth last night sent his apologies to those hoping to hear him commentate on the Final Table of the WSOPE Main Event as he is now star of the show. 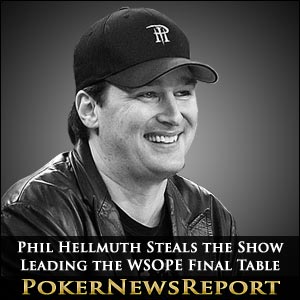 Phil Hellmuth last night sent his apologies to those hoping to hear him commentate on the Final Table of the WSOPE Main Event as he is now star of the show.

Hellmuth – chasing his thirteenth WSOP bracelet and the 2012 Player of the Year title – was on sparkling form during the penultimate day on the World Series of Poker Europe Main Event. Bursting into song almost every time he won a hand, the overnight chip leader eliminated four players himself and combined with Day 3 chip leader Joseph Cheong and Day 2 chip leader Sergii Baranov to decimate the field from 24 players to the final 8 before the scheduled dinner break.

That is Why They Are Called Bitches

The day started very badly for anybody dealt pocket Queens. Stephane Albertini (who started with 230,000 chips) was dealt K♥ K♦ on the very first hand and was able to double up against Liv Boeree (Q♥ Q♦), while Kurt Kohlberg (10♥ 10♠) doubled up against Paul Tedeschi (Q♣ Q♠) when hitting the 10♦ on the flop. Vadzim Markushevski´s Q♠ Q♦ could not improve to beat Stephane Girault´s A♣ A♠ and Chris Brammer briefly took the tournament lead when his K♣ K♥ eliminated Sebastien Guinand in 20th (Q♣ Q♦).

Shortly after, Brammer himself was dealt Q♣ Q♥ – and doubled up David Benyamine (A♦ 10♥) – but, by then, the day was developing into the Barranov, Cheong & Hellmuth show as the chip lead seemed to flip-flop with every hand.

Barranov – Barranov´s 10♣ 10♠ make a set on the flop to eliminate Andy Frankenberger (A♥ J♦) in twenty-second place and takes the Russian back over a million chips after losing an early pot to Phil Hellmuth.

Hellmuth – Hellmuth takes the chip lead for the first time when his Aces hold against Joe McGowan´s 9♣ 9♠ to eliminate McGowan in nineteenth place (we are still in the first level of the day at this point).

Cheong – Joseph Cheung (A♣ 10♣) regains the chip lead when spiking the 10♦ on the river to eliminate Liv Boeree (A♦ Q♣) – for which he apologised on Twitter afterwards.

Hellmuth – Phil Hellmuth breaks the 2 million chip barrier when his Aces hold against Curt Kohlberg´s J♥ 10♥ – at which point Hellmuth breaks into “Everybody Wants to Rule the World”. Kohlberg is out in seventeenth.

Cheong – Following the departure of Liv Boeree, British hopes of a victory take a further blow as Max Silver´s A♠ K♦ is no match for Joseph Cheong´s turned Straight. Cheong goes to 2,350,000 chips.

Barranov – Sergii Baranov joins Cheong at the top of the leaderboard when his 2♥ 2♣ hits a set on the flop and makes a full house to eliminate David Benyamine in fifteenth.

Hellmuth – Hellmuth (A♣ 5♣) goes past 2.5 million chips and back into the lead when making two pairs to bust Kyle Julius (Q♣ 10♣) in fourteenth before the second level of the day had finished.

Cheong – Joseph Cheong slipped back to 2 million chips when losing in a JJ<AA race against Sergii Baranov, but gets it back against Steve Dannenmann when his J♣ J♥ best Dannenmann´s 9♦ 9♠ – Dannenmann out in twelfth

Hellmuth – The Poker Brat is singing again as his A♦ J♥ hold against the A♥ 10♥ of Nicolas Cardyn (eliminated in eleventh). Hellmuth is the first player to reach 3 million chips and is back in the lead once again.

Baranov – Baranov and Cheung clash in a pot worth 600,000 chips which Cheong has to let go. Baranov then takes consecutive pots from Jason Mercier and Chris Brammer to climb to 3.6 million chips.

The final table of eight was set when last remaining British hope Chris Brammer shoved with 3♣ 3♠ and was called by the short-stacked Timothy Adams (A♥ J♠). Brammer´s Threes held and when play resumes at the Majestic Barrière Casino in Cannes (at 1.45pm today), blinds will be 12,000/24,000 (ante 4,000) and the chip counts looking like this:-