Pennsylvania’s Mark Herm heads the surviving 236 players after day one of the $5,000 Triple Chance No-Limit Hold’em event of the World Series of Poker (WSOP) in Las Vegas. But the biggest talking point of the day was Phil Hellmuth’s latest explosion of expletives as he departed the event somewhat earlier than he had expected. 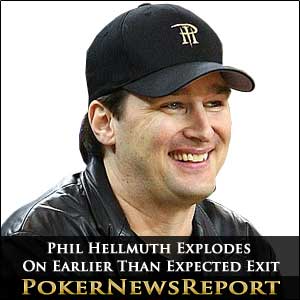 Pennsylvania’s Mark Herm heads the surviving 236 players after day one of the $5,000 Triple Chance No-Limit Hold’em event of the World Series of Poker (WSOP) in Las Vegas. But the biggest talking point of the day was Phil Hellmuth’s latest explosion of expletives as he departed the event somewhat earlier than he had expected.

Of course, The Poker Brat did not leave quietly. We would expect nothing else from the cantankerous 46-year-old, though.

The 11-time WSOP bracelet winner was on approximately 31,000 in chips when he took a phone call from his wife. Although difficult to hear exactly what he said, Hellmuth was heard to mutter words such as “seven hours’ sleep”, as well as “just won a pot” and “frustrating”. We weren’t eavesdropping, of course.

Anyway, a few moments later, Hellmuth shouted out: “God!”, to be swiftly followed by an exasperated: “Are you f*cking kidding me?”

What was the source of his frustration? Well, with all his chips in the middle on the flop and holding 3s-3c, Hellmuth was met with his opponent’s As-9h. The board showed 3h-9d-4c-9s-4h. The A-9 had, of course, been the underdog to Hellmuth’s trip threes, but the nine and four on the turn and river had handed his opponent a better full house to send the superstar crashing out – while still holding a conversation with his wife!

Hellmuth ignored his conqueror to leave his seat and continue his telephone conversation, pointing out that “the guy just put in 50k with ace-nine – I got him to put in 50k with top pair”.

Hellmuth – who has been left annoyed in his attempts to set a WSOP record with a 12th bracelet after recording two runner-up spots this year – did eventually leave the table, but not before taking a final dig at his opponent.

Taking the phone away from his ear, he gave a fierce look before saying: “How f*cking bad are you?” What would have angered him even more, though, was that his opponent was obviously enjoying his moment in the spotlight as he put one knee on his seat, punched the air with a fist and shouted: “I got Phil Hellmuth!”

With a definite declaration of disdain, Hellmuth shook his opponent by the hand and said: “Very nice play, sir – very nice play” before departing.

Meanwhile, Mark Herm holds 148,400 in chips to sit just 400 ahead of New York-based Russian Vladimir Mefodichev after last night’s opening 10 levels of event #50, while Britain’s James Akenhead is placed third on 144,100 and Texan Gregory Back is fourth on 141,200. Also still in with a shout is seventh-placed Norwegian Johnny Lodden – a PokerStars Team Pro – with 132,600 chips.

A total of 817 players registered for this poker tournament to create a prize pool of $3,839,900 – with a whopping $825,604 going to the winner – but 581 of those saw their dreams of a WSOP gold bracelet ended in the Amazon Room of the Rio All-Suite Hotel & Casino.

The most impressive fact relating to this event, however, is that eight of last year’s November Nine – from the main event – started yesterday’s opening day, with just Florida’s Michael Mizrachi missing as he lost his heads-up battle in event #47, the $2,500 Omaha/Seven Card Stud Hi-Low-8 or Better, to Owais Ahmed – who picked up $255,959 for his first WSOP gold bracelet.

However, other big-name pros did not have such a good day in the $5,000 Triple Chance No-Limit Hold’em event, with the likes of Jonathan Duhamel, Shaun Deeb, Vanessa Selbst, JC Tran, Tony Dunst, Humberto Brenes, Daniel Negreanu and Hellmuth, of course, crashing out.

Still, even with Hellmuth and other quality players out, tonight’s session will not be a walk in the park as the likes of Tony and Joe Hachem, Barry Greenstein, Jake Cody, Carlos Mortensen, Gavin Smith, Josh Arieh, Lex Veldhuis and Andy Black are still in the competition.

The event pays down to 81st place for $9,561, so the gathered railbirds can expect some fireworks this evening as the money bubble approaches.

Top 10 chip leaders after day one of the $5,000 Triple Chance No-Limit Hold’em event: