Phil Hellmuth rarely takes a bad beat particularly well and is known for being explosive. However, there is another side to this 47-year-old star. 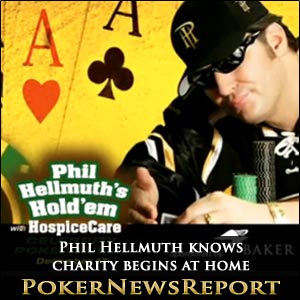 Most poker fans know Phil Hellmuth as an explosive and more-often-than-not cantankerous player that rarely takes a bad beat particularly well. However, there is another side to this 47-year-old star of the game – and that is as a caring and concerned citizen who tries to do his best for those less fortunate than himself.

So that’s most of us, then. But, seriously, the 11-time World Series of Poker (WSOP) bracelet winner will once again venture home to Madison in Wisconsin for his second annual Hellmuth’s Hold’em with Agrace HospiceCare.

The event kicks off on Saturday, December 17, with the proceeds from a tournament, raffle and silent auction going to Agrace HospiceCare, which is a non-profit hospice that is dedicated to offering expert emotional, physical and spiritual help to patients and their families in south central Wisconsin that deal with life-shortening conditions.

There are two particularly exciting prizes on offer at the event’s raffle – a 2012 WSOP seat and a two-year lease of a Zimbrick Honda CR-V LX – so poker fans will be sure to sign up in huge numbers.

Certainly, Hellmuth expects another exciting event, although he believes “it will be tough to top last year’s jet-fueled, energy-laced event! But we aim to, when I hit Mad-town for Phil Hellmuth’s Hold’em with HospiceCare 2011 on December 17”.

The Poker Brat added that “this is going to be the night to remember in Madison, all to help Agrace HospiceCare and the good it does for the community”.

Additionally, there will be some big-name pros, including Dewey Weum, Annette Obrestad, local star Eric ‘basebaldy’ Baldwin and Tony ‘D1rtyR1v3r’ Nardi, in attendance to provide Hellmuth and Agrace HospiceCare with extra support, while local celebrities will also be on hand to move between tables to socialise with participants.

Event organiser and tournament director Steve Verrett is eagerly anticipating the event, saying that their aim is to get “the guys who are coming home for the holidays” to give up some of their time for such a worthy cause and to have “a great time”.

In fact, Verrett added that was “how we started this with Phil coming home for the holidays and having him do a charity event – we came up with this idea and it got really big last year”.

But organisers are anticipating a massive increase in numbers for this month’s event, with expectations high that more than 400 players will sign up.

Verrett tries to involve as many people as possible, stating that “what we do is take the entire Madison poker community and have them be dealers – they all volunteer to deal”.

There will be 48 tables available, so making it possible to have a field of 432 players for the day-long event that will be held at the Wisconsin Institutes for Discovery Town Center.

Registration begins at 2pm, with the poker tournament starting about an hour later. However, it is also possible to pre-register by getting on over to agracehospicecare.org.

Good luck, Phil. It’s great to see you giving back to your local community.