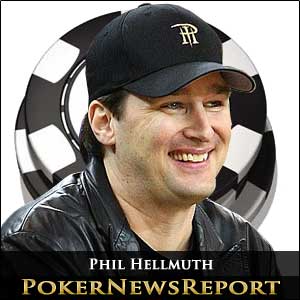 Phil Hellmuth might have missed out on his record-breaking 13th gold bracelet at the World Series of Poker (WSOP) in Las Vegas the other day when finishing as runner-up to John Juanda in the 2-7 draw lowball championship – but he is back in contention again in the $10,000 seven-card stud hi-low split-8 or better event.

Following two days’ play, California-based Hellmuth sits in eighth place on 332,000 in event No.33, although he does hold less than half that of chip leader Eric Rodawig’s 695,000.

As well as Virginia’s Rodawig, the 46-year-old Poker Brat will also have the likes of David Benyamine, Erik Seidel and Ted Forrest to contend with as he aims to capture bracelet No.13 and a $442,183 top prize from an original starting line-up of 168 entrants.

Incredibly, we’re also still not in the money yet as only 16 are paid and that means two more players have to be removed this evening before anyone is guaranteed at least $27,888.

Day two began with 127 competitors – or just over 75% of the starting field – but all that changed pretty swiftly as players such as Jason Mercier, Barry Greenstein, Erick Lindgren, Daniel Negreanu and poker legend Doyle Brunson crashed out without cashing.