Phil Hellmuth Hints he May Sign With New Sponsor

Phil Hellmuth revealed that he may be signing a new sponsorship deal in coming weeks during a radio broadcast entitled “Short Stacked Radio” with the show’s host, Mark Hoke. 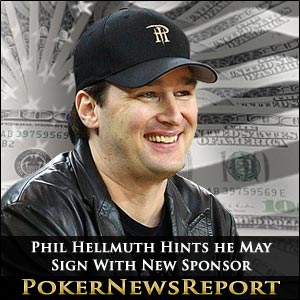 I happen to be in a pretty lucky position where we have had more than one discussion recently, you know, there’s some very big companies and some very big people that are starting to get ready for the legalization of online poker, Hellmuth told radio listeners. You may find me signing something in the next two weeks. You may find me signing with a company that no one’s ever heard of. Don’t be surprised if that happens.

The Poker Brat had long been sponsored by and affiliated with UltimateBet since its inception in 2001, but ended his relationship with the online poker site in Dec. 2010, prior to the fallout from the events of Black Friday in April of this year. Along with Full Tilt and PokerStars, UltimateBet and its sister site Absolute Poker were charged with fraud, money laundering and violating the Unlawful Internet Gambling Enforcemant Act (UIGEA). UltimateBet has since stopped providing internet poker services to the U.S. market and has lost 99% of its player traffic, according to recent statistics, as part of the CEREUS Network with Absolute Poker.

As the record holder for the most World Series of Poker (WSOP) bracelets with 11, and one of the most famous and outspoken poker pros in the world today, Hellmuth is undoubtedly one of the most sought after pros for endorsement and sponsorship purposes. His in-your-face trash talking style and brat personality make him the kind of player that others in the poker industry either love or hate. Those who love him watch his every move and those who dislike him do so as well, looking for an opportunity to vent their rage and displeasure with his style and/or personality.

Regarding the legalization of [geolink href=”https://www.pokernewsreport.com/us-poker-sites”]online poker in the U.S.[/geolink], Hellmuth is certain that it will happen in the near future. I wouldn’t be surprised if it passed before Feb. 1 … I think there’s going to be the biggest explosion in poker history the minute [online poker] is legalized, he said.

A 2007 inductee into the WSOP Hall of Fame, Hellmuth has tallied over $13 million in lifetime tournament winnings, including 45 final table finishes in WSOP events. His popularity soared upon winning the WSOP Main Event title in 1989 as a 24-year-old, which was, at the time, the youngest age at which any player had ever captured the crown.