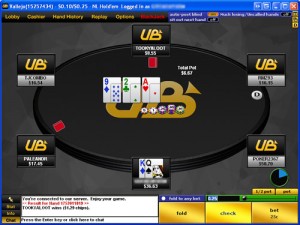 Ultimate Bet (UB.com) have announced that they have parted ways with Phil Hellmuth and Annie Duke – two players who have been with them since 2001. The news, which has come as a shock to many in the poker community, comes just months after three other high-profile players were shown the door at UB – Billy Kopp, Michael Binger and Matt Graham.

While there has already been a flood of rumors around why the two players have left UB, several reports suggest that Hellmuth will sign for the WSOP.com poker site because he is an 11-time WSOP bracelet winner and probably the best person to represent the site. However none of this has been confirmed and is currently just speculation. Annie Duke on the other hand has publicly stated that she does not plan on signing with another online poker site in the future and instead will be ‘exploring other avenues of business and personal growth’.

Meanwhile Joe Sebok has confirmed that UB are seeking to move in a new direction and are only interested in younger poker professionals, and will be announcing the newest addition to Team UB next week. There is mounting speculation that the player is Prahlad Friedman – who has never signed a sponsorship deal with an online poker site before.

Neither Hellmuth or Duke had anything but positive things to say about Ultimate Bet upon their departures. Annie Duke stated:

I have nothing but positive things to say about UB and my experiences with the brand, management, and the incredible people who work hard daily to deliver a terrific online poker experience.

It will be very intriguing to see what the future has in store for both players and whether another site will snap him up. One thing confirmed is that he will be appearing on the upcoming season of Dancing with the Stars.