Speculation that professional poker player Phil Hellmuth could be on the verge of splitting with UB.com. his sponsors, have grown significantly following a month of appearances without any form of UB.com branding on his attire… 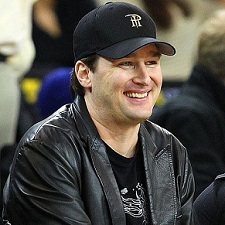 Speculation that professional poker player Phil Hellmuth could be on the verge of splitting with UB.com. his sponsors, have grown significantly following a month of appearances without any form of UB.com branding on his attire.

The spot was seen by TwoPlusTwo forum user Mike Johnson who also runs PokerCast, and Johnson raised the question whether UB.com and Hellmuth are about to go their separate ways, with UB.com possibly about to lose their biggest named pro player.

Johnson revealed that the most recent sighting of the pro failing to represent the online poker brand was that of Hellmuth competing in the PokerStars North American Poker Tour (NAPT) both in the Main Event as well as the Bounty Shootout competition.

The fact that ‘The poker brat’ was not featuring any form of branding in such a large tournament series is very irregular within the professional game of poker and so Johnson pointed out that this could be a huge sign that the player and the brand are breaking away from each other.

Although the player has been seen not showing his branding at the tournaments, there has been no official statements to signify that the split has happened but a look into the poker community shows that people are trying to speculate which other online poker room could soon be about to unveil the pro as part of their sponsored roster.

Hellmuth has been a huge force in poker so far in his career and he has been able to cash more than $11.5million in poker winnings during his time at the tables, leaving the poker community linking his next poker brand to be one of the two biggest online poker rooms in the world, PokerStars or Full Tilt Poker.

Although it would have been expected that if either poker room where in talks with the player they would have signalled that through a comment within their official sites, nothing has emerged as yet, creating a new possibility that Hellmuth could be about to create his own online poker room or even join forces with a number of his closest friends in order to create the same result.

The fact that the player has not been seen wearing the branding of UB.com could well be something innocent and the lack of comment made about such a huge piece of news could mean that there is nothing wrong between Hellmuth and his current sponsor.

A look at the professional poker players official site reveals that the branding is still present there, so it could simply be that the player opted not to wear his branded wear for the last month but then again it could be that the site is still to be updated.

If the thoughts of Hellmuth leaving the UB.com brand are confirmed to be true, it could have a shattering effect on the online poker room as the player has been a key part of the rebuilding that the brand had to go through following a number of pieces of bad press, such as the super user scandal which could have easily let the poker site empty.