Poker legend Phil Hellmuth has said there is “a good chance” he will play in the $1 million buy-in The Big One for One Drop No-Limit Hold’em charity event. 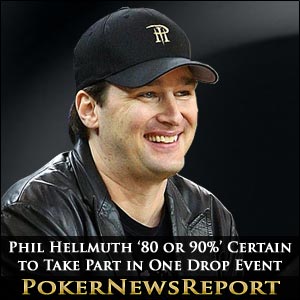 Poker legend Phil Hellmuth has said there is a good chance he will play in the $1 million buy-in The Big One for One Drop No-Limit Hold’em charity event.

The 11-time World Series of Poker (WSOP) bracelet winner is likely to join players such as Team Party Poker Pro Tony G, Sam Trickett, Gus Hansen, Erik Seidel and Team PokerStars Pros Daniel Negreanu and Bertrand ‘ElkY’ Grospellier in the chase to take down event #55 – as well as the biggest prize in poker history and a specially-commissioned platinum bracelet.

The 47-year-old – who took down the 1989 WSOP main event in Las Vegas for $755,000 – will almost certainly have sold most of his action, if he does sign up to the event that will run from July 1 to 3 at the Rio All-Suite Hotel & Casino, according to what he told Card Player.

He pointed out that he believes he is fortunate as numerous people have texted him to say they want pieces of him, including two who are willing to put up $250,000 for me to play, while also emphasising that Las Vegas trial solicitor David Chesnoff is already prepared to back him with $50,000, so ensuring that he already has $550,000 of the buy-in without even trying.

With that in mind, Hellmuth stated that there is a good chance he’ll play – adding that he is 80 or 90% sure he’ll take part.

Just 48 players can take part in the event – which will see $111,111 from each buy-in go to the One Drop charity created by Cirque Du Soleil founder Guy Laliberté that aims to supply clean water to those in need – with an estimated 40 players already certain to play.

If that figure is accurate – with WSOP executive director Ty Stewart saying that the exact number won’t be revealed until next month – that means the winner will take home $15,644,446.40 from what will be the biggest high stakes cash game of all time.

Finnish high stakes online cash specialist Jens ‘Jeans89’ Kyllönen also recently added his name to the incredible line-up for this event that will introduce the One Drop Foundation as the official charity of the WSOP.

Kyllönen, who is listed among the big winners this year on PokerStars, said he aims to put up the buy-in, but may also sell some shares, adding that, as he has enjoyed such a great 2012, he has taken the decision to go for this once-in-a-lifetime opportunity.

The Helsinki pro added that, while he can’t wait to line up against some of the biggest names in poker and help out a worthy charity, his real aim is to take the lead from Juha Helppi in the Finnish all-time money list.

Hellmuth In The Mood To Succeed

Meanwhile, Hellmuth – who has been trying to improve his No-Limit Hold’em game while also playing cash games – added that he feels really, really good after picking up a few tricks that he hadn’t been aware of, so providing him with more weapons so succeed as the WSOP gets into full swing.

‘The Poker Brat’ also stressed that he is willing to play the majority of tournaments at the 43rd staging of the world-famous poker festival as he strives to win his 12th bracelet – and might even sign up for some side events, if he is struggling to sleep!

Certainly, the Wisconsin native will be aiming to better his 2011 series, when he finished as a runner-up in three events – although that task might have just got harder with eight-time WSOP winner Phil Ivey having appeared in Vegas after giving last summer’s series a miss in protest at the lack of payments being made to Full Tilt Poker customers following the events of Black Friday.

However, if he’s worried by the presence of Ivey, Hellmuth is not showing it, saying that is thrilled to have arguably the world’s best poker player back in Sin City – even though he is a threat to me in the long run.

Battle of the Phils Pushes Hellmuth

Hellmuth believes his 36-year-old rival is a wonderful player who possesses an amazing amount of talent – citing the fact Ivey won four bracelets between 2000 and 2001 as proof of that – while also emphasising that he might catch up with his 11 bracelets at some point.

But Hellmuth sees that threat as a challenge to do even better this year, pointing out that Ivey will keep the pressure on him to play great while also putting some numbers up on the board.

We at Poker News Report (PNR) are definitely with Hellmuth on that – as this is bound to be good for the world’s greatest game and the WSOP as a whole. Roll on a clash of the titans!