Blom headed into the weekend on fire, and was up over $500k right off the bat. He played over 7,300 hands throughout the weekend, and showed no signs of slowing up by Sunday. While Blom was on a great run, his big mistake came in his decision to play against Galfond heads-up. 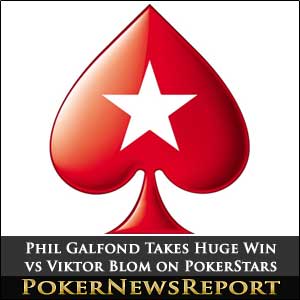 While PokerStars’ traffic has gone down a bit since the Black Friday incident on April 15th, there is still quite a bit of action in terms of high stakes poker going on there.

Typically, even some of the best high stakes games in online poker don’t have much mentioned about them; but in comes a story that will catch most peoples’ attention.  Maybe it is the fact that this heads-up match featured two of the most profitable poker players out there today, or maybe it is more about how the match went down, but this one made for an interesting story line.

Phil Galfond was big in the online poker world until he was no longer allowed to play on PokerStars after Black Friday, so he decided to make the move to Canada in order to continue his online poker career.  Since Galfond made the move to Canada he has been one of the hottest players in the game, and has won over $1 million just on PokerStars.  Galfond will most likely be hanging in Canada for a bit longer as it seems that his online game is currently in top form.

Viktor “Isildur1” Blom has made an incredible amount of money in online poker, and while he plays a few live tournaments; his focus has definitely remained in playing online.  Blom came on to the scene virtually out of nowhere, but has made a name for himself over the past year and is one of the biggest names who remains on PokerStars after Black Friday.

Blom headed into the weekend on fire, and was up over $500k right off the bat.  He played over 7,300 hands throughout the weekend, and showed no signs of slowing up by Sunday.  While Blom was on a great run, his big mistake came in his decision to play heads-up against Galfond.  The two sat down at a $100/$200 Pot Limit Omaha table, and that was where it all went wrong.  By the end of their time, Galfond was up to $452k against Blom, and Blom had gone on a huge downswing of over $600k total in a two day span after his original profit of $500k.

These two players have played heads-up before, and Galfond got the best of Blom last time as well.  After the huge loss that Blom took, it was hard to imagine that he would play Galfond again anytime soon, but the two were found playing earlier this week at a heads-up $25/$50 Pot Limit Omaha table.