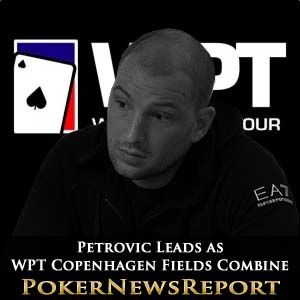 The two Day 1s of the inaugural WPT Copenhagen Main Event have been alive with action – none more so than the action which surrounded Andre Petrovic from the opening hands of Day 1A. The Swedish poker player, who to date has only recorded a minor cash in a side event at the EPT Copenhagen earlier this year, tore through the field on Monday to establish a stack of 220,400 chips – half as many again as second placed Rasmus Neilson (146,300 chips).

Petrovic´s substantial chip lead – he amassed almost double the chip stack of Day 1B chip leader Sergii Baranov (110,400 chips) – might have been attributable to the fact that the WPT Copenhagen was a re-entry event and players were a little looser than usual, or some amazing good fortune.

Within the first two levels of play, Petrovic had chipped up to over 100,000 chips (starting stacks 30,000) after hitting a runner-runner flush to cripple Nick Honore and flopping a set of Eights to eliminate Sean Jazayari (two pairs – Aces and Nines).

With his significant advantage, he blasted through the remaining six levels of the day – eliminating Bryn Kenney with A♠ Q♦ > A♣ 8♣ and bluffing his closest rival – Rasmus Neilson – out of a 25,000 chip pot with nothing more than 9♠ high.

Sergii Baranov – famously beaten by Phil Hellmuth in the WSOPE Main Event in September – ground his way to a small chip advantage over a much more subdued field on Day 1B. The Ukrainian started poorly – at one stage down to half his opening chip stack – but recovered well, and took the Day 1B chip lead right at the death when rivering a wheel after putting his tournament life at risk with K♥ 4♥.

Close on Baranov´s coattails are Sean Jazayari (91,400 chips), who re-entered after his early departure on Day 1A, and was responsible for the elimination of Party Poker´s Tony G (A♥ 9♠ > 9♦ 6♦) after both players hit two pairs on the flop, and Niko Mykkanen (109,500 chips) – who woke up to find pocket Queens in front of him as Ramzi Jelassi shoved with pocket Nines.

Looking Ahead to Day 2 of the WPT Copenhagen Main Event

When Day 2 of the WPT Copenhagen Main Event starts at the Casino Copenhagen at 12.00 noon (1.00pm GMT) 141 of the 229 original entrants remain and blinds will be 400/800 with an ante of 100. Another eight levels of play are scheduled for today and, with the average chip stack being only 48,723, those who will not be under pressure to make any early moves include:-