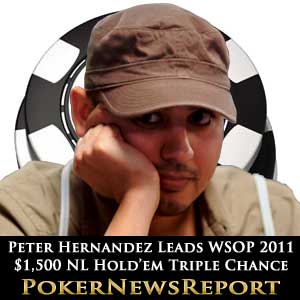 The World Series of Poker (WSOP)’s 2011 event #12 $1,500 no-limit Hold’em triple chance tournament, lost an incredible 1,180 players from its field during day one to leave Peter Hernandez as the chip leader of the 160 survivors.

As with so many of the tournaments at the Rio All-Suite Hotel & Casino in Las Vegas this year, the action was thrilling from the very start as many players immediately opted to make use of their two $1,500 chip ‘rebuy lammers’ in an attempt to bully opponents.

But it was Hernandez who emerged as the chip leader in the Pavilion Room following the opening day on 124,700, making use of some fabulous calls and a smattering of good fortune to keep the likes of three-time WSOP bracelet winner JC Tran at bay.

Tran is, however, sitting on a healthy 117,000 chips in third spot, just 5,700 behind second-placed Jonathan Karamalikis. They will all be gunning for the $352,808 top prize, as well as the gold coveted bracelet, of course.

England’s Steve Watts – who is at the WSOP following the advice offered to him by friend Sam Trickett – also made great use of his three chances to build his stack up to 99,500 to sit in fifth place.

Some past WSOP main event winners crashed out on day one, with Scotty Nguyen, Greg Raymer, Joe Cada, Jonathan Duhamel and Jaime Gold all failing to make the money.

In fact, only one main event winner remains in the field and that is Carlos Mortensen – with 57,100 and in 23rd place – after 10 levels of play yesterday.