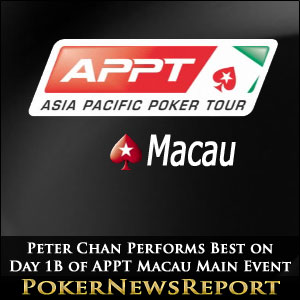 Peter Chan emerged from Day 1B of the APPT Macau Main Event with the biggest stack of chips, but not enough to give him the overall lead in the tournament.

Sadly much of the action on the tables was overshadowed by accusations of cheating between the players for chip stealing and card marking, and Tournament DirectorDanny McDonagh was kept busy throughout the day – at one point checking each players´ fingernails to identify who had been tampering with the cards.

In respect of the card marking accusations, the review of a security tape is still ongoing and we could see the field reduced by one or two players when Day 2 gets underway this afternoon.

Amid all the allegations of card marking, three very successful poker players made their entrances but failed to leave a mark on the tournament. APPT Seoul champion Chane Kampanatsanyakorn, 2013 WSOP ACOP bracelet winner Aaron Lim and reigning APPT Macau champion Alexandre Chieng all entered the APPT Macau Main Event with high hopes of a deep run, but all three were to depart before the end of the day.

Looking Ahead to Day 2 of the APPT Macau Main Event

With 206 players returning to the City of Dreams, and only 60 players scheduled to get paid, Day 2 of the APPT Macau Main Event is likely to be another tough one. A further 7½ levels are scheduled to be played after which we will have a better idea of who the primary contenders will be for the APPT title. Hopefully the action will be more focused on the poker skills of the players rather than their less savoury skills!