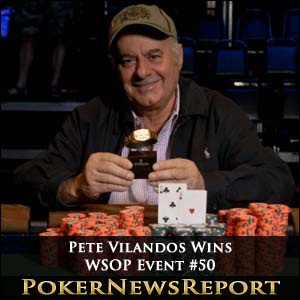 The Houston-based 72-year-old was also collecting his third gold bracelet – following wins in 1995 and 2009 – after defeating Illinois’ Kyle Julius heads-up for the title that left the 25-year-old runner-up with a $589,687 consolation prize following something of a marathon tournament.

The three-day event actually carried over into a fourth day – taking in 32 60-minute levels – before Vilandos emerged victorious from a 1,001-player field at the Rio All-Suite Hotel & Casino.

Dan Smith Out in Third Place

Three players started Day 4, with Vegas-based Dan Smith the chip leader, although he was the first to exit in third place for $368,943 after struggling to get anything going.

Smith’s final hand saw him all-in as the short stack while holding A♠ K♠ against Vilandos’ A♣ 10♥, with the former staying ahead on the 8♣ 6♥ 3♣ flop. However, Vilandos took the lead when the 10♠ came on the turn for top pair, while the 6♦ river changed nothing so saw Smith exit.

Vilandos took a healthy chip lead of 8.8 million to the 5.3 million of Julius into heads-up play and immediately put pressure on his younger opponent. In fact, the veteran quickly increased his lead through level 32 before scoring the final knockout of the event early in level 33.

The final hand saw Vilandos limp in from the button, big blind Julius move all-in for about 2.1 million, and Vilandos make the call. Vilandos showed A♣ J♠ while Julius revealed A♠ 5♠ to see a flop of K♣ Q♥ 4♦. The turn provided the rivals with the 3♠ to give Julius a few more outs, but the 10♠ sealed the deal to give Vilandos his third bracelet from his 20 years of playing the WSOP.

Day 2 saw the money bubble burst, with the 303 Day 1 survivors battling it out to make at least $8,939 in 177th place. Numerous big-name pros, however, crashed out of the tournament before pocketing any dollars, including main event champs Pius Heinz (2011) and Peter Eastgate (2008), as well as Jonathan Duhamel, Jeff Lisandro, Andy Frankenberger, Jennifer Harman, Terrence Chan, Phil Hellmuth and Jackie Glazier.

The most disappointed, though, will be Brazilian star Alex Gomes, who claimed the unwanted tag of ‘bubble boy’ when exiting in 118th.