Pennsylvania to Host Third Stop of Poker Night in America

Pennsylvania has long been rumored as one of the states that will follow Nevada, Delaware and New Jersey into the realm of legalized online poker and gambling. 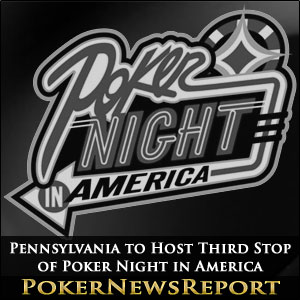 Pennsylvania has long been rumored as one of the states that will follow Nevada, Delaware and New Jersey into the realm of legalized online poker and gambling.

Industry insiders believe that such legislation will eventually be approved by lawmakers in the Keystone State. Whether that happens sooner or later is yet to be decided. But Poker Night in America (PNIA) is making a push to show that in addition to being a steel town, Pittsburgh is also a poker town.

Poker Night in America has announced that its third tour stop will be at the Rivers Casino Pittsburgh from November 21 – December 3, 2013. A total of 28 events are on schedule at the Pittsburgh Poker Open Winter Series with buy-ins ranging from $125 to the three-day $1,100 Main Event that kicks off on Friday, Nov. 29.

PNIA made its debut in August at the Turning Stone Casino in Verona, New York. Its second stop is underway now at the Peppermill Reno Resort Spa Casino in Reno, Nevada. The Main Event at that location begins November 21.

Recently inducted Poker Hall of Famer Scotty Nguyen will be playing at the Main Event in Reno. PNIA has received confirmation that more WSOP Main Event winners will be seated at the Main Event in Pittsburgh. Joe Cada, who wears a gold bracelet as the 2009 champ, and Greg “Fossilman” Raymer, who took the title in 2004, will be looking at hole cards in ‘Steel City.’

PNIA is filming the action at various tour stops throughout America for broadcast in early 2014. In addition to tournament action, the production crew is taping a high-stakes cash game at each location. The invite-only cash games require a bankroll from $5,000 to $20,000. Players wishing to be on the list of potential invitees can email Nolan Dalla at nolan@pokernight.com.

Poker fans usually know what to expect when tuning into poker broadcasts. However, PNIA is aiming to revolutionize poker on television and is promising programming that’s a bit different from the norm that includes a bit of airtime away from the felt. Poker fans will have to tune in early next year to see if the PNIA broadcasts do indeed provide more excitement.