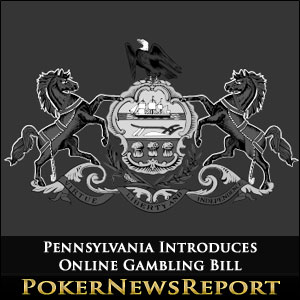 Applicants for a Pennsylvania online gaming license would be restricted to current land-based casino operators. Those who apply would pay a fee of $5 million and an additional $500,000 renewal fee every three years. Taxation on Internet gaming operators is set at 28% of gross gambling revenues. That rate would likely be among the highest in the industry.

The proposal has been amended since the first draft was released in the beginning of the year following discussions with casino representatives. Davis had previously proposed a $16.7 million license fee and then modified that amount to $10 million. As introduced yesterday, the measure halved the fee to $5 million, eGR reported.

While reducing the initial license fee, the rate of taxation was amended upward to 28% from its initial proposal of 20%. Much of that money is earmarked for various state programs.

The bill allows for interstate and international partnership agreements to increase player liquidity. It does not allow residents of other states to travel to New Jersey and play from there. The measure is restricted to Pennsylvania residents who must physically visit a brick and mortar casino to establish an online account. This differs from Nevada regulations that permits state tourists to play poker online within the state.

In addition to online poker, all forms of casino games would be allowed under the plan. Regulation would be overseen by the Pennsylvania Gaming Control Board.

Following its introduction in the state legislature, the proposal was referred to the House Gaming Oversight Committee. Davis is one of 25 members of that committee. Her proposal is likely to be opposed by fellow committee member Rep. Paul Clymer, who has gone on record as saying that he may propose legislation to outlaw online gambling.

Pennsylvania is ranked second in the nation behind Nevada in the gaming market. Davis’ proposal aims to keep pace with the Silver State, as well as the neighboring states of Delaware and New Jersey, who have already approved Internet gambling legislation and are preparing to launch sometime this year.