Paul Volpe will take a handy chip advantage into Wednesday´s Day 2 of the WPT World Championship despite doubling up Miles Austin in the last hand of the night. 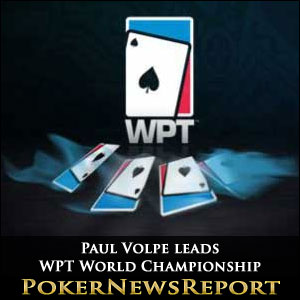 Paul Volpe will take a handy chip advantage into Wednesday´s Day 2 of the WPT World Championship despite doubling up Miles Austin in the last hand of the night.

The $15,400 buy-in WPT World Championship is the pinnacle of Season XII of the World Poker Tour and has a guaranteed prize pool of $5 million. With such a substantial prize, 105 of the world´s most recognisable players turned up at the Borgata Hotel, Casino & Spa in New Jersey to take part in Day 1A.

With such a high profile turn-out, there were some interesting table pairings as the “Shuffle Up and Deal” was announced, with last year´s WSOP Champion Ryan Reiss drawn on the same table as Ryan Eriquezzo, Jake Schindler and WPT Caribbean winner Tony Dunst, while Bay 101 “Shooting Stars” WPT Champion James Carroll had Eric Baldwin, Matt Glantz, Guillaume Darcourt and Mukul Pahuja for company.

With 50,000 starting chips and levels each lasting seventy-five minutes, the action throughout the early levels was fairly subdued. Barry Hutter – who final tabled last week´s WPT Seminole Showdown – was the first recorded elimination in Level 3; moving all-in with A♠ 7♣ after the flop had paired his Seven, but Kevin Song (9♦ 8♦) completing his open-ended straight draw on the Turn.

James Carroll´s tournament life came to an end when he ran the last of his chips into Mukul Pahuja´s flopped set of Kings and Ryan Eriquezzo picked the wrong time to run his K♠ Q♥ into Shannon Shorr´s A♠ A♥. Further eliminations followed, and included Lily Kiletto, Ryan Reiss, Noah Schwartz and Jared Jaffee – all of whom have the opportunity to re-enter the WPT World Championship during the first seven levels of today´s Day 1B.

Moving towards the end of the Day, Anthony Gregg emerged as the chip leader after busting out Chris Moorman Q♣ Q♥ > 7♥ 5♥ (Moorman missed his open-ended straight draw), but he was soon overtaken by Jerry Wong, Brandon Steven, Jerry Wong and Paul Volpe – who chipped up into the chip lead when eliminating Micah Raskin 8♠ 8♥ > 2♠ 2♦ after both players flopped a set.

Volpe´s overnight chip lead could have been bigger but for doubling up Miles Austin A♦ 10♦ > Q♦ Q♠ in the last hand of the night, but his chip stack of 215,300 will still represent a handy 180 Big Blinds when he takes his seat at the table for Wednesday´s Day 2. Whether or not his stack will be large enough to retain the overall lead is a question that will be answered after today´s Day 1B, which gets underway at 11.00am ET today and is scheduled to play another eight levels.

Sixty-two players advanced from Day 1A of the WPT World Championship, with those at the top of the chip counts being: