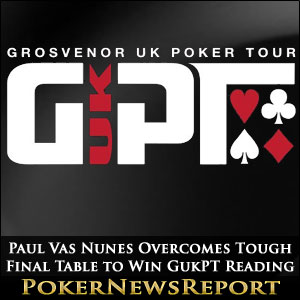 The GukPT Reading Main Event was another storming success for Grosvenor Casinos, as 268 players ponied up the £550.00 buy-in over the two opening flights on Thursday and Friday to smash the £100,000 guarantee and create a prize pool of £134,000.

The twenty-six player money bubble burst during the penultimate level of Saturday night, when Wai Yuen moved all-in with A♦ K♠ and ran straight into Ernest Waczkow´s pocket Aces! Thereafter the remaining players were assured of a £1,050 min-cash and, after one further level of play, nineteen players still had chips remaining for Sunday´s final day.

It took three hours on Sunday for the nineteen survivors to be whittled down to a final table of nine; and, within those three hours, Willie Tan had moved to the top of the tightly contested leaderboard, courtesy of a massive double up against overnight chip leader Dan James A♦ A♥ > Q♦ Q♣.

Despite the relative proximity of the top five chip counts, the leading players were not averse to taking each other on. In one of the first hands of the GukPT Reading Final Table, the two chip leaders got into a battle which saw Willie Tann´s chip stack move beyond 1 million chips when his A♣ Q♥ turned a Full House against Robert Whatsize.

Tann – a WSOP bracelet winner from 2005 – was temporarily joined at the top of the leaderboard by Haresh Thaker, who eliminated Albert Sapiano in ninth place A♣ A♥ > A♠ J♣; but Tann then put some space between himself and the chasing pack when busting out Steve Chennells in eighth place K♦ K♣ > A♣ Q♦ after the flop of Q♣ J♠ 3♥. Tann now up to 1,690,000 chips

… But Vas Nunes Leads the Way when Deal is Made

The gap between the respective chip counts closed up once again when Dan James bust Robert Whatsize in seventh place A♠ K♣ > A♦ J♥, and Paul Vas Nunes sent Richard Turner to the rail in sixth place K♥ 9♥ > 5♦ 5♣ – Vas Nunes being fortunate to spike a heart on the River to complete his flush after Turner had flopped a set of Fives.

The pivotal hand of the GukPT Reading Main Event came shortly before the dinner break, when Paul Vas Nunes turned a diamond flush to relieve Willie Tann of 935,000 chips, and although he eliminated Jeff Hemmerman in fifth place, Tann was now third in chips of the four remaining players when the following deal was made:

The deal had left £10,000 and a seat in the GukPT Grand Final for the winner, with an extra £8,000 for the second place finisher and an extra £6,000 for third. However, the deal did not accelerate the pace of the action, and after Haresh Thaker had doubled up with a rivered straight against Paul Vas Nunes (9♥ 8♥ > A♣ 5♦), and Willie Tann also doubled up against the chip leader with a rivered straight (9♣ 7♣ > A♥ 5♦), the chip stacks were much closer in size than they had been at the start of four-handed play.

A tense couple of levels followed until the end of Level 25 (blinds 15,000/30,000 (ante 3,000); when Haresh Thaker had the misfortune to run his pocket Tens into Paul Vas Nunes´ pocket Jacks (Thaker eliminated in fourth place) and then almost immediately Dan James (A♦ J♠) called Vas Nunes´ shove with J♦ J♣ and failed to find the Ace he needed to avoid being bust in third place – Vas Nunes taking a comfortable 3.8 million -v- 1.5 million chip advantage into the heads-up against Willie Tann.

Using his significant chip advantage to good effect, Paul Vas Nunes developed a 3.3 million chip lead over Willie Tann, but Tann doubled-up K♦ 8♥ > A♦ 6♥ to get himself back into contention. Again Vas Nunes ground down Willie Tann´s chip stack, and again Tann doubled up to stay in the game. A further deal was agreed that would split the remaining cash difference £1,200 to Vas Nunes and £800 to Tann, and pretty soon the tournament was all over.

The final hand of the tournament saw Willie Tann move all-in on a board of 8♦ 2♣ 10♠ / K♣ with A♦ 10♣ for a pair of Tens. Paul Vas Nunes made the call with K♦ 6♦ for a pair of Kings, and the 4♠ on the River confirmed Vas Nunes victory in the GukPT Reading Main Event – ending a long string of final table appearances for Paul Vas Nunes without a winning entry recorded on his Hendon Mob database.