The eighth PokerStars World Blogger Championship of Online Poker (WBCOOP) has come to a close with three entrants emerging as the big winners from the festival. 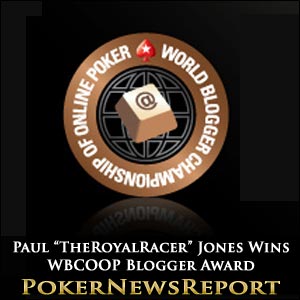 The eighth PokerStars World Blogger Championship of Online Poker (WBCOOP) has come to a close with three entrants emerging as the big winners from the festival.

First up there is Irishman Paul Jones – who is known as TheRoyalRaiser on microblogging website Twitter – after he collected the Best Blogger award when saying on his video how he would hand over half of his $5,000 prize to a children’s charity, while one quarter to would go to his family and the last he would use as a buy-in to a UK and Ireland Poker Tour (UKIPT) event.

Maybe he’ll consider the upcoming UKIPT Nottingham stop – from April 12 to 16 – at the world-famous Dusk Till Dawn, where entrants will be thrilled to know that the venue’s Rob Yong has only just announced a guaranteed prize pool of £1 million (or about $1,567,047) for the £700+£70 buy-in main event.

Ultimately, Jones’ writing during the WBCOOP festivities meant he picked up the cash and the honour as Best Blogger.

I’m speechless!” he said after the announcement. “It was a great competition from the start. Half of the prize will go to Temple Street Children’s Hospital in Dublin Ireland. The hospital relies so much on public donations.

The Best Live Tweeter award and $1,000 went to Agnes Archibong-Omon, who is known as cardkahleesi on the website and also uses that nickname when playing the world’s best game, after the social media team with PokerStars were impressed by her Twitter posts during the WBCOOP.

A thrilled Archibong-Omon tweeted: “Winning the prize is really a bloody good icing on the awesome cake that was #WBCOOP 2012. Thank you to the PokerStars crew.”

Lastly, Poland’s Bartosz ‘wilczybobek’ Oder succeeded in the WBCOOP Player of the Series category as the many bloggers and tweeters took to the virtual tables over 11 days of competition in 31 events.

For topping the leaderboard, Oder received a trophy, a live tournament or online package for any PokerStars-sponsored event throughout the world, a 2012 Spring Championship of Online Poker (SCOOP) main event medium ticket and a special edition chipset.

Meanwhile, PokerStars’ MicroMillions kicks off today for another 11 days of action until the final event closes on the 25th.

The latest online festival from the world’s biggest poker room will feature 100 tournaments – with as many as 10 running a day – as well as a huge guaranteed prize pool of $5 million, and a $22 buy-in main event that promises $1 million in prizes.

Tournament buy-ins start at just 11¢ and go all the way up to the main event’s $22, although most events fall somewhere between $1 and $5.