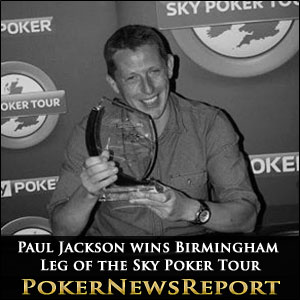 The Birmingham leg of the 2013 Sky Poker Tour was played at the Broadway Casino this weekend, with Paul ‘jac35’ Jackson sharing the £4,392 first prize after a heads-up deal was made with runner-up Clare ‘roguecell’ Gardner. The tournament attracted the maximum field of 180 plus a stack of alternatives, eager to take on Sky Poker regulars Julian Thew, James Hartigan and Richard Orford.

However, for most of the day, the focus was on actor Bill Maynard (‘Oh No Its Selwyn Froggitt’) who built an early chip lead, maintained it through the dinner break and just missed out on a seat at the final table when busting in twelfth. The final table of the Sky Poker Tour Birmingham was reached after just seven levels with the relative chip stacks looking like this:-

Gardner Takes the Lead as the Short Stacks are Weeded Out

By the time the final table was reached, the blinds had risen to 5,000/10,000. Clare Gardner took over the chip lead when doubling up against Chris Newman (AK > QQ), and Barry Cobb (Q-10) was the first player to be bust from the climax of the SPT Birmingham when Kevin O´Driscoll (8-8) made a set of Eights on the flop.

Cobb was quickly followed by Stewart Hulston, who failed to improve his Ace-King against Clare Gardner´s pocket Tens, and Chris Newman´s depleted stack eventually went the way of the other remaining female at the final table – Shana Javani – when Javani´s 8-7 paired on the flop to master Newman´s 10-4.

Paul Jackson almost joined Clare Gardner at the top of the leaderboard when eliminating Robbie Smith in seventh A-Q > A-10, and Paul Busby maintained his position among the leading chip stacks when his pocket Queens were too good for Kevin O´Driscoll´s A-10 – O´Driscoll out in sixth.

As the final table progressed, and the blinds rose rapidly (now up to 10,000/20,000), players were quickly finding themselves short-stacked. Shana Javani (pocket Eights) ran her last 150,000 chips into the pocket Kings of Clare Gardner to be eliminated in fifth, but Gardner was stopped from running away with the tournament when she doubled up Paul Busby 55 > AQ.

Paul Busby also managed a second double up against Paul Jackson when his pocket Aces held, but Jackson bounced straight back when crippling Matt Dowler 55 > A4. Matt Dowler was eventually eliminated in fourth when his short stack was picked off by Paul Busby´s pocket Kings.

Paul Busby´s challenge to be the Sky Poker Tour Birmingham Champion disappeared in two hands, when he doubled up Paul Jackson A-6 > Q-10 and then ran his last four Big Blinds (now 20,000/40,000) into Jacksons pocket Kings to leave Jackson and Gardner practically level on chips as the two remaining players went into the heads-up.

A deal was agreed before the start of the climax to the Sky Poker Tour in Birmingham, which saw Paul Jackson and Clare Gardner split the first and second place payouts and leave the trophy to play for.

In the final hand of the event, it looked as if Clare Gardner would take an unassailable lead in the tournament when her A-9 paired with an Ace on the flop of A-K-J, but Paul Jackson (Q-4) found a Ten on the river to make a broadway straight and become the latest Sky Poker Tour Champion.

The cap of 180 players and 27 alternatives created a prize pool of £20,500 which was shared among the top 23 players. Those who battled their way to a seat at the final table received the following amounts:-

The next leg of the Sky Poker Tour takes place at Nottingham´s Dusk till Dawn poker club on July 27th and 28th, and is a two-day 6-Max NL Hold´em event with a buy-in of £220 and a guaranteed prize pool of £40,000. Satellites are already running on Sky Poker.