Paul Jackson won the February Grand Prix at Dusk till Dawn for £23,500, after coming out on top in an engrossing heads-up battle against James Williams. 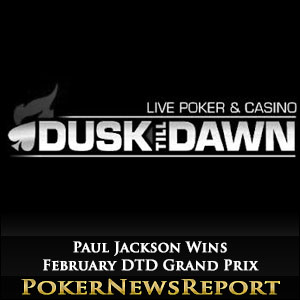 Paul Jackson won the February Grand Prix at Dusk till Dawn for £23,500, after coming out on top in an engrossing heads-up battle against James Williams.

The tenth Dusk till Dawn Grand Prix attracted 2,560 entries last weekend and ensured that the £100,000 guaranteed was safely surpassed. After ten Day 1s (four online and six live at the Nottingham poker club), 316 players returned to Dusk till Dawn on Sunday to play down to a winner.

The final table was set just before midnight, with last year´s DTD Poker League winner Paul Jackson having a narrow chip advantage over DTD regular Guy Johnson and James Williams, who won the Sky Poker Tour Grand Final at Dusk till Dawn in 2011.

By the time the final table got underway, the blinds were 100K/200K and the short stacks started shoving almost immediately. Ross White scored a valuable double-up against Paul Jackson Q♣ Q♠ > 7♥ 7♦ when both he and Jackson flopped sets; but Tony Byrne had the misfortune of running his pocket Kings into Jason Herbert´s pocket Aces and he was eliminated in tenth place.

Paul Coughlan doubled-up against Will Young in the battle of the short stacks when his J♥ 7♥ flopped a Jack-high straight against Young´s pocket Kings, and Will Young was sent to the rail in ninth place soon after when his pair of nines was bested by James Williams two pairs – Aces and Queens.

He´s not Known as “ActionJack” for Nothing!

Paul “ActionJack” Jackson had a big role to play in how the final table developed as it went eight-handed. He bust Oliver Morgan in eighth place when Morgan hit top pair with Ace-Three, but Paul Jackson rivered a Broadway straight with Ten-Five, and then Jackson doubled up Paul Coughlan AJ > 66.

Jackson then eliminated Guy Johnson in seventh place Aces > Queens to recover the chip lead and, as the blinds rose to 250K/500K, Paul Jackson had 19 million of the 49 million chips in play. James Williams joined Jackson at the top of the leaderboard when busting out Jason Herbert K♥ J♣ > K♦ 10♦, and the game went four-handed when Ross White flopped a Jack to send Paul Coughlan to the rail in fifth place AJ > AK.

Despite Paul Jackson knocking out Joe Hall in fourth (flopped a pair of Tens to best K-7) and Ross White in third (pocket Eights improved to a set > White´s missed gutshot straight draw), James Williams held a significant 29 million -v- 20 million chip advantage going into the heads-up; courtesy of forcing Jackson out of a 9 million chip pot (K-Q > A-K) on a Queen high board.

Jackson battled back and twice forced Williams out of valuable pots to take the chip lead once again; and it took a real cooler of a hand to determine the winner.

With 3 million chips already in the pot, Paul Jackson check-called James Williams´ 2 million chip bet on the flop of 6♣ 3♦ 5♠. Williams was again the aggressor following the Turn of 2♣, pushing out a bet of 3.2 millions chips, which again Jackson called; but, following the 2♣ on the River, Paul Jackson announced he was all-in. Williams called and the cards were on their backs:

Williams: 4♠ 3♠ for a Turned Six-high straight

Jackson: 5♥ 2♥ for a rivered Full House Deuces over Fives

The next Grand Prix at Dusk till Dawn takes place from April 14th – 21st and has a £150,000 guarantee. Players are being encouraged to enter early with two promotions already up and running – the Golden Chip Bonus and the Race to Ten.

Golden Chips are being given away to the first 500 players who qualify online for the DTD April Grand Prix and, should any of those 500 players reach the final table on April 21st, they will be rewarded with a £5,000 bonus of DTD tournament entry vouchers.

The Race to Ten promotion is offering ten free seats in UKIPT Main Events (each worth £1,100) for the first ten players to win ten Grand Prix seats online. The seats do not all have to be for April´s event (although there will be ten Day 1s).

Players have the option of entering on multiple Day 1s and carrying their best stack forward into Day 2, and players who have Golden Chips can re-enter if they are knocked out in one of the early Day 1s and still have the opportunity of a £5,000 bonus if they reach the final table.