Paul Findlay took down the UKIPT Series 6 at PokerStars Live yesterday and immediately donated 10% of his £12,396 prize money to the charity Help for Heroes. 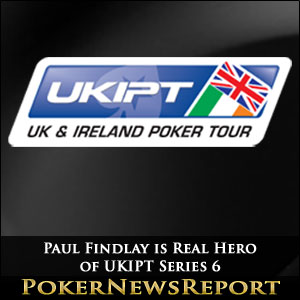 Paul Findlay took down the UKIPT Series 6 at PokerStars Live yesterday and immediately donated 10% of his £12,396 prize money to the charity Help for Heroes.

Paul Findlay proved to be a real hero yesterday at the Hippodrome Casino in London – battling through 353 players in the UKIPT Series 6 to win £12,396 after a four-way deal at the final table. However, this was not the toughest battle Findlay had ever faced.

In 2009, Paul Findlay lost a leg when serving with the 19 Light Brigade in Afghanistan and has since become an ambassador for the Help for Heroes charity – an organisation which helped him come to terms with having his leg amputated after his patrol vehicle was blasted by a bomb.

Yesterday Paul Findlay nearly didn´t bother showing up for Day 2 with a stack of less than 10 Big Blinds, but he soldiered on and found pocket bullets at the right time to take control of the UKIPT Series 6 final table and then go on to master Mario Trattou in the heads-up.

From two opening flights on Friday and Saturday, 105 players survived to take their seats for yesterday´s action. The 47-player bubble burst just after 3:00pm when Rob Ayton moved all-in with A♣ 7♦ and received a call from a player with A♠ J♦. Ayton looked good for a double up after the flop and Turn of 8♦ 8♣ 4♥ / 7♥, but the J♣ spiked on the River to send him to the rail in forty-eighth place.

The usual rush of eliminations followed the bubble bursting – with Paul Findlay chipping up somewhat fortunately when his K♠ 4♠ spiked a five-high straight on the River to double up against Victor Ilyukhin (A♦ Q♥) who had turned two pairs. Two hands later and Findlay bust Ilyukhin when his pocket Threes held over the (rather annoyed) Ilyukhin´s pocket Deuces.

The final table was set when Mario Trattou eliminated three players in quick succession – enabling to go into the climax of the UKIPT Series 6 with a chip stack double the size of his nearest opponent:

Four Bust and Deal is Agreed

The final table started well for Steven Lewzey – tripling up with A♥ 6♥ after hitting a runner-runner flush – but not so well for Jen-Yue Chiang, who doubled up Paul Findlay K♥ K♦ > A♠ K♠ before Findlay eliminated Chiang in eighth place with 10♥ 10♦ > 8♥ 8♦.

Paul Findlay took a big hit to his chip stack when doubling up Onur Dag 10♣ 10♠ > A♦ Q♣, but he was soon to recover second place in a sensational hand which saw Steven Lewzey move all-in with A♣ 7♣, Day 1A chip leader Darren Murphy move over the top with 8♠ 8♥ and Findlay making the call with A♠ A♥.

Findlay´s Aces held to eliminate Lewzey and cripple Murphy, and Darren Murphy was the next player to leave the final table when Zhashayor Zarghampour (Q♣ 5♥) found two pairs to best Murphy´s J♥ 7♣. Onur Dag was eliminated just a few hands later by Garcia Damaso (Ace-King > pocket Nines) after which the four remaining players agreed a deal which left £3,500 to play for as well as a seat in the UKIPT Champion of Champions event later this year.

With the deal agreed, Paul Findlay wrapped up victory in the UKIPT Series 6 within forty-five minutes. Garcia Damaso was unlucky to be bust in fourth place after moving all-in with 8♠ 6♠ after the flop of 10♠ 8♥ 6♦. He got a call from Khashayar Zarghampour (Q♦ 10♠) and was bust when Zarghampour hit a Jack and a Nine to complete a runner-runner Queen-high straight.

Khashayar Zarghampour´s good fortune deserted him almost immediately. Having been put all-in by Mario Trattou (K♣ 5♦), Zarghampour (Q♠ 7♠) looked good to double up into the chip lead following the flop of 9♠ 8♠ Q♣. However, no more spades were dealt on the board, and Zarghampour was sent to the rail in third place when Trattou spiked the K♦ on the River – Trattou taking a narrow chip advantage into the heads-up against Paul Findlay.

Mario Trattou´s chip advantage went pear-shaped in the first hand of the heads-up – Paul Findlay doubling up K♠ 7♦ > Q♦ 4♠ after the two players had got their chips in the middle following the flop of K♣ Q♠ 7♥. Trattou tried to battle back, but Paul Findlay set a marvellous trap with pocket Aces – eliciting a shove from Trattou on the flop of K♠ Q♥ 9♦ with a paired Queen. Findlay made the call and Turned a set of Aces – sealing his victory in the UKIPT Series 6.