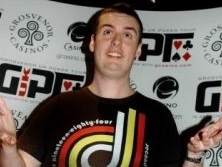 The Grosvenor UK Poker Tour (GUKPT) Brighton Main Event took place this week and with a field of 160 players, the tournament took 3 days to complete.

This was Leg 7 of the GUKPT series and the tournament boasted a £1,070 buy in fee and is considered to be one of the most prestigious UK poker tournaments available.

Paul “Badpap” Foltyn, a professional poker player from Doncaster, took control of the tournament before he was eventually able to overcome the 160 player strong field and take first place for £46,400 ($73,968).

Foltyn is well known within the poker scene, being a high stakes tournament and MTT specialist and with online poker earnings of $2,488,887 there was no surprise that he was found at the final table.

After 3 days of poker action, the final table became known and with Foltyn up against the likes of Jose Azoriin, Paul Romain, Damian Evans and five others, things began to really heat up.

The final 10 battled their way through the dry deck and soon there was only two players remaining, Foltyn and Jose Azoriin.

Running into the heads up section of the tournament against Azoriin, Foltyn boasted a 4 to 1 chip lead and managed to finish off his opponent after Azoriin pushed all in with Q-T only to be called by Q-J.

The victory meant that not only had he taken another title in the GUKPT, with a previous victory in November 2008, but it also added to his live poker earnings, taking the total to $679,767.

Foltyn has had an up and down few months at the poker tables, showing that even some of the best poker players have a rough patch at the tables, adding to his blog that he was getting frustrated with the game after admitting that even smaller issues leave him “going off in a rage at the computer screen”.

Foltyn’s win earns him a seat in the Champions of Champions event which takes place in Coventry in December, but next up for the GUKPT is Blackpool for Leg 8 of the series. GUKPT Blackpool begins 6th November and runs until 14th November, culminating in a £1,000 buy-in Main Event.