Fabulous Finnish star Patrik Antonius has been added to an already-stellar PartyPoker.com Premier League Poker V line-up that will gather in Vienna in April. 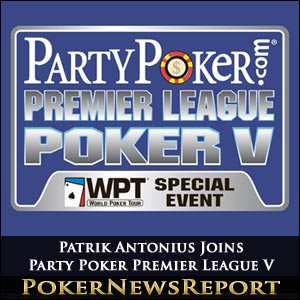 Fabulous Finnish star Patrik Antonius has been added to an already-stellar PartyPoker.com Premier League Poker V line-up that will gather in Vienna in April.

World Poker Tour (WPT) Player of the Year Frankenberger, from New York, will certainly have his work cut out for him as he attempts to add this title at the Montesino when the 16-player line-up take part in the $125,000 buy-in main event – which will be presented by Team Party Poker Pro Kara Scott – from April 4 to 10 as part of the WPT Vienna stop.

However, the American will have to – as will all the qualifiers – battle through a televised play-off from April 1 to 3, when 12 pros will be joined by a dozen Party Poker qualifiers for a place in the 16-player main event that will feature two groups of eight players who must fight it out over four league matches for a spot at the eight-handed final table.

As expected, the main event will once again feature Party Poker’s $2,000 per point system, while the leading three players from each group will head directly to the final table as the fourth and fifth placed contestants face up to a best-of-three heads-up encounter for the other two spots among the elite.

Of course, Party Poker are already running six weekly satellites, daily qualifiers and freerolls that will ultimately lead to a play-off place at the WPT’s special event, so make sure you get signed up before the March 18 deadline.

The eventual main event winner will pick up a $25,500 WPT World Championship seat for the May 19 to 26 event at The Bellagio in Las Vegas, while an extra $200,000 has been added to the $2 million prize pool for the Vienna tournament’s final table.

Andy Frankenberger is the Man to Beat

Every starter will be aiming to emulate Frankenberger’s success from November, when he picked up $100,000 at the Playboy Club, when the American defeated the likes of Andrew Feldman, Sorel Mizzi, Max Pescatori, James ‘Flushy’ Dempsey and Matt Giannetti at the six-handed final table.

The €3,500 buy-in WPT Vienna main event starts after the Premier League V main event is completed and runs from April 10 to 15, while the Party Poker Big Game VI kicks off on April 11 for the 48-hour tournament.

So, if you fancy a shot at glory in Austria, get on over the Party Poker, where satellites are up and running right now that will ultimately lead to the lucky nine winners being handed $13,000 Premier League packages for Vienna.

Each package includes a $10,450 seat at the televised play-off, while two qualifiers will be awarded with $125,000 entries to the Premier League V final – which will also be broadcast – as well as four nights at a lavish hotel and $1,350 to spend.

[isGeoAllowed]Meanwhile, have a look at our [geolink href=”https://www.pokernewsreport.com/partypoker”]Party Poker review[/geolink] – especially if you are looking to open a new account at a poker room as you will also find a link to [geolink href=”https://www.pokernewsreport.com/party-poker-bonus-code”]our Party Poker Bonus code[/geolink] page, which explains how easy it is to redeem your bonus.[/isGeoAllowed]