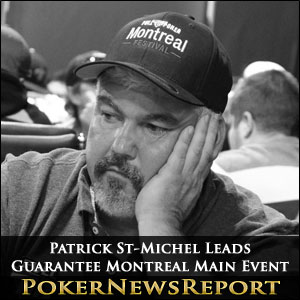 After three Day 1s of the Full Tilt Poker Montreal Poker Festival Main Event, 471 players remain in the C$1,100 buy-in tournament from the total entry of 1,625 who either entered or re-entered the event and bust the C$1,000,000 guaranteed prize pool.

At the head of the combined chip counts is Montreal local Patrick St-Michel, who stacked up nicely half way through the day when his flopped heart flush bust out two players (pocket Aces and pocket Queens) and enabled him to finish strongly to top the leaderboard with 456,700 chips.

On St-Michel´s tail is US poker player Vineet Pahuja, who is only 200 chips behind the chip leader, with the chasing pack nearly 80,000 chips further back and led by the winner of this event in 2011 – Guillaume Rivet.

Mixed Fortunes for the Big Names

The three Day 1s of the Montreal Poker Festival Main Event resulted in mixed fortunes for the Full Tilt Poker Ambassadors who participated in the tournament. Larissa Metran fired two bullets in the event (and missed with both), while Tom Dwan lasted at his table for less than two hours. Gus Hansen´s best effort saw him scrape into Day 2 with 35,400 chips and, of the Full Tilt sponsored pros, only Martins Adeniya (175,000 chips) and Dermot Blain (154,000) appear in the top 100 players.

Other top names who will not be sharing their presence on Day 2 tournament include recent Borgata Poker Open winner Will Failla, Playboy model Trishelle Cannatella, Canadian hockey legend Guy Carbonneau, and PokerStars´ Chris Moneymaker – who at one point had accumulated a six-figure stack, only to see it blown away after the dinner break.

When play resumes at the Playground Poker Club in Montreal later today, the remaining players will be entering Level 12 (blinds 800/1,600- ante 300) and play is scheduled to continue for nine 60-minute levels.

You can find out how the chip leaders perform – and the big names in pursuit of them – by following @PokerNewsReport on Twitter.