Patrick Pulls the Plug on Partouche.fr

Patrick Partouche has announced that the online poker site Partouche.fr will close on Monday 17th June and existing players will be transferred to MyPok.fr. 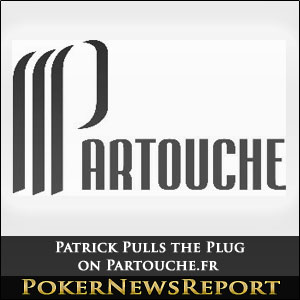 Patrick Partouche has announced that the online poker site Partouche.fr will close on Monday 17th June and existing players will be transferred to MyPok.fr.

Patrick ‘I´m no cheat’ Partouche made his announcement on his Facebook page after a French TV show broadcast a special investigation into the running of the online operation. Plans were already well advanced for the migration of players to the Partouche Network skin MtPok.fr according to the Partouche Poker home page, which states “The migration to MyPok was approved by ARJEL [the French regulator of online poker] on May 15th”.

The Partouche online poker site has recently been like a ghost town, with few players taking advantage of the massive overlays available in guaranteed prize fund tournaments. The software has been criticised for being unstable and forty Partouche online poker accounts were recently investigated by ARJEL after allegations were made that the Partouche family and top-ranking employees were being given ‘rewards’ of tournament entries and Frequent Player Points.

In his Facebook announcement, rather than blame the demise of the online poker site on his company´s own failings, Patrick Partouche chose to point the finger at everybody else from PokerStars to the taxman in his statement – part of which read:

I just watched Special Investigation! To all my “friends” poker players for once it is not in Partouche we cheat! I see nothing on the forums etc … You are less “dynamic” for Wina, Pokerstars and barrier! No hard feelings, I love you anyway.

Many observers have grown tired of Patrick Partouche´s frequent Cantona-esque ramblings after being accused not only of gracing his family and friends with ‘rewards’ at the Partouche.fr tables, but for ‘overlooking’ the Pasqualini/Rossi cheating scandal that took place on the final table of the 2009 Partouche Poker Tour and for attempting to renege on the €5 million guarantee in the final Partouche Poker Tour in 2012.

When the news broke on the French poker forums, many contributors announced that they would be pleased to see the back of the site and hoped that Partouche would heed the warnings and clean up his live poker and casino operations.

Some also brought up the fact that Patrick Patouche was a keen supporter of ring-fenced online poker in France when it was first discussed and allegedly lined the pocket of then president and good friend Nicolas Sarkozy in an attempt to keep ‘foreign’ online poker companies out of France (even though Partouche himself registered his company in Gibraltar).

The MyPok Migration Does Not Include Player Benefits

Although players will automatically have their Partouche Poker balances in their MyPok accounts on Tuesday 18th June, the Partouche Loyalty Program will cease to operate from Monday 1st June and any unclaimed player bonuses, tournament tickets or family privileges will be lost. Players who might be affected by this ‘policy’ should visit https://www.partouche.fr/fermeture.html for a full explanation of the migration process and for further information about exchanging any outstanding bonuses for cash.