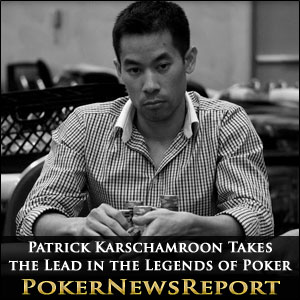 After three days of action at the Bicycle Casino, Patrick Karschamroon leads the fifteen players remaining in the WPT Legends of Poker Main Event

Patrick Karschamroon may be an unfamiliar name to many players outside of Los Angeles – indeed, other than a handful of tournament cashes in Las Vegas, he has never played outside of California – however, today he sits at the head of the chip counts with only fifteen players remaining in the WPT Legends of Poker Main Event.

Karschamroon is no stranger to success at the Bicycle Casino – having won a Legends of Poker side event in 2009 for $31,400 – and yesterday the cards fell in his favour to enable the former California State poker Champion to take a commanding chip advantage into the penultimate day of the WPT Legends of Poker Main Event.

Day Begins with Rush to Cashier

As is normal when the bubble bursts (as it did in the final hand of Sunday´s action), short-stacked players play hands that would never normally fall within their opening selection in the hope of a quick double-up, and yesterday that led to a formidable queue forming at the Cashier´s desk. Within the first level of play (Level 18 – blinds 3,000/6,000 – ante 1,000) fourteen players had bust out of the tournament – including the one-time massive chip leader Faraz Jaka.

The pattern continued throughout the next two levels and, by the beginning of Level 21 (blinds 6,000/12,000 – ante 2,000) just thirty-four players remained – still headed by overnight chip leader Dan Heimiller. However, it was about this time that Patrick Karschamroon started his astronomical ascent into the chip lead.

Patrick Karschamroon´s dramatic rise to the top of the leaderboard started with the dual knockout of Henrik Antanesian and Darlene Lee. Antanesian had been crippled in a previous hand and shoved his last 20,000 chips into the pot with 9♥ 8♥. Darlene Lee tried to isolate him and shoved over the top with J♠ J♥, but Karschamroon was sitting on K♦ K♥, and the K♠ on the flop sewed the hand up for Karschamroon and eliminated both Antanesian and Lee from the WPT Legends of Poker Main Event.

Karschamroon hardly had time to count his chips before he was involved in another hand – this time taking a 400,000 pot against Jordan Cristos with A♥ J♥ – and followed that up with calling a Dan Heimiller bluff for another half a million. By the end of Level 21, Patrick Karschamroon had chipped up to 3,350,000 chips and taken a chunk out of Dangerous Dan Heimiller´s stack (Heimiller later recovered to close the day with 2,155,000 chips).

Karschamroon Gives a Little Back

Patrick Karschamroon maintained his chip advantage despite doubling-up three players over the next couple of levels – Sam Barnard K♦ J♦ > A♦ K♣, Greg Muller 9♣ 9♦ > A♣ K♦ and Brian Gorman 9♦ 9♥ > A♣ J♠ – but Karschamroon got his revenge by busting Mueller out of the tournament in twentieth place, and then eliminated Ludovic Assouline in seventeenth just before the chips were bagged and tagged for the evening; Karschamroon counting up 4,155,000 chips – 65 Big Blinds ahead of his nearest rival John Gordon.

Day 4 of the WPT Legends of Poker promises to be a pretty short one as play on Day 3 was due to come to a close when the field was reduced to eighteen players. With just fifteen players remaining in the event – and the plan being to play down to a final table of six – Day 4 could be over by the dinner break!