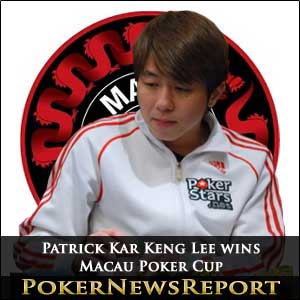 Patrick had to overcome an international field consisting of 478 players to claim his trophy, first prize of HK$1,039,700 (US$133,417) and a year´s sponsorship from PokerStars Macau.

It is never easy to win a major live poker event of any kind, but when you are coming into the final day in twenty-first position of twenty six, and the shortest stack on your table, you need a little bit of luck just to survive. Patrick found himself all-in after just 30 minutes of play with 10♥ 10♠ against Yang Zhang´s A♠ 6♠, and looked as if he would be heading home early when the flop fell A♦ J♥ A♥. The K♣ on the turn slightly improved his hopes, but the 10♦ on the river was the card which kept Patrick in the game and started his roll to victory.

Patrick kept a cool head as plenty of players were despatched to the rail during the first few hours and barely got involved as the blinds continued to increase. Just before the third level of the day (8,000/16,000 – ante 2,000), Patrick doubled up again when his 7♠ 7♦ held against Pawel Chmiel´s A♥ 6♦, and again when his A♠ A♣ bested Wenlong Jin´s Q♦ J♦.

Onto the Final Table

Within the first three hours of play, seventeen players had been busted out of this prestigious tournament but, once on the final table, it took two hours for the first player to depart. Wenlong Jin had entered the final table in second position behind Xiaobo Zhou (another PokerStars qualifier) but had been the target for a number of the small stacks to double up against. He rose to the bait once too often – this time against Malaysian Jun Wah Yap, who spiked the 6♣ on the river to smash Jin´s flopped set of Kings and send the Chinaman to the rail.

In the following two hours, four further players were to depart from the game, while Patrick Kar Keng Lee continued his patient waiting game. Just before the dinner break, as the blinds increased to 20,000/40,000 Patrick (441,000 chips) called chip leader Zhou´s all-in bet (2.3 million chips) with A♥ J♣ against Zhou´s Q♥ 5♦. The 8♣ K♣ 6♥ flop kept Patrick ahead and, with the 10♦ on the turn helping neither player; it was down to the river. The Q♦ gave Zhou top pair, but also completed Patrick´s straight and he survived once more.

Building up to the climax of the tournament, the chip stacks looked like this

Within a few hands of the players returning, Zhou had extended his chip advantage by eliminating the Malaysian Jun Wah Yap. But whatever Patrick Lee had during his dinner break certainly agreed with him, as he twice doubled up through Zhou in consecutive hands (Lee A♦ Q♣ v Zhou 9♦ 3♠ and Lee K♣ Q♠ v Zhou K♥ 2♦) and then bullied both Zhou and Tsuchikawa out of substantial pots with big post-flop raises.

Patrick´s great roll continued when he caught the chip leader betting with Ace high against Patrick´s 9♣ 9♦, and moments later crushed the player who looked to have an unassailable chip lead at one point. Patrick raised Zhou´s post-flop C-bet to 500,000 chips on a board of 2♣ K♦ 10♦ and then pushed him for a further 800,000 chips on the 4♠ turn. Zhou shoved his stack into the centre of the table and Patrick called – flipping over K♠ 10♣ against Zhou´s A♦ Q♠. With Zhou requiring a 10 to outdraw Patrick, the 8♥ on the river was of no use to Zhou, and the following hand he was gone – his A♥ 7♥ falling to Tetsuya Tsuchikawa´s diamond flush.

Patrick took a 2:1 chip advantage into the heads Up against Tsuchikawa and used his lead to out-bet the man from Japan on almost every hand. With his stack declining to less than 10 BBs without seeing any action, Tsuchikawa finally cracked and shoved his last 961,000 chips into the pot holding 10♠ 10♦. Patrick hesitated for a moment before making the call but – as so many times before – his decision was the right one, and his A♠ J♣ found the A♦ on the flop to make Patrick the latest PokerStars qualifier to win a major live poker event.