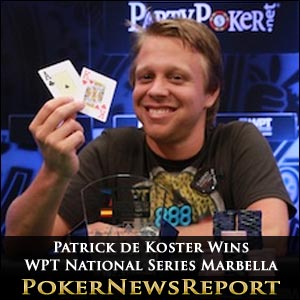 The Casino Marbella attracted 377 starters for the re-entry competition to break the record for the biggest field ever assembled for a WPT National Series tournament at this inaugural event on the Costa del Sol, with [geolink href=”https://www.pokernewsreport.com/888-poker”]888 poker[/geolink] pro player Patrick De Koster – who dominated the eight-handed final table to score every knockout – ultimately beating 28-year-old Englishman Pete Linton in their heads-up meeting for his first live tournament crown.

Having disposed of Spain’s Jose Carlos Lopez in third place for $71,450, De Koster and Linton agreed to a deal – before the Dutch player secured his final elimination after less than 30 minutes of head-to-head action when his A♣ K♥ saw off the K♦ 10♦ of the Englishman after the board showed J♦ A♦ 8♠ 7♥ 4♣ to give the champion top pair.

Biggest Ever Cash for Champion

The 27-year-old from Oegstgeest was obviously delighted to triumph, particularly as this is his biggest ever cash from a live event – easily beating out the $41,967 the Dutch pro pocketed for finishing in 247th place at last summer’s World Series of Poker (WSOP) main event in Las Vegas.

This victory also ensured that De Koster more than tripled his career earnings, having previously earned $85,303 from four in-the-money finishes, prompting him to say: This is amazing, while also adding that he has been thinking for some time that I’ve wanted to buy a small apartment and now I am able to do this.

De Koster, though, was just delighted to be at the event, adding:

Even if I hadn’t won, I cannot say enough how much I enjoyed this event – it was so friendly and brilliantly organised.

The only regret is I didn’t get to see more of Marbella as I have always been in the casino. I cannot really complain, though!

The final day began with many fans hoping for a home win as four Spaniards sat down at the final table. However, not even start-of-day chip leader Antonio Gonzalez Miranda – who is gaining a well-deserved reputation as a quality player – could maintain his charge as he crashed out in sixth place for $30,088.

German multi-table tournament specialist Daniel Keller was the first player to hit the rail in eighth place for $16,846, and he was quickly joined by Spanish trio Jose Luis Plaza (seventh for $22,549), Miranda and Imma Marti Torres (fifth for $38,019).

However, play tightened up after Torres’ exit, before De Koster then eliminated Danish pro Philip Porter (fourth for $50,867) and the last of the Spanish quartet, Jose Carlos Lopez, in third for $71,450 following a three-way all-in pot, before then overcoming Linton, who left with $107,503 for his runner-up spot.

Meanwhile, the WPT – who expect to announce partnerships with a number of other venues soon – now moves on to Cannes from May 31 to June 3 for a stop at Le Croisette Casino Barriere de Cannes.