Patrick Clarke Knocks Them Out in Irish Open

Patrick Clarke overcame a strong final table to win the Paddy Power Poker Irish Open and collect a €50,000 bonus for being the sole surviving online qualifier. 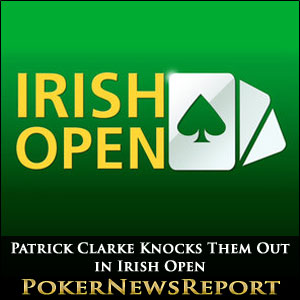 Patrick Clarke overcame a strong final table to win the Paddy Power Poker Irish Open and collect a €50,000 bonus for being the sole surviving online qualifier.

The Paddy Power Poker Irish Open is the longest running NL Hold´em poker tournament in Europe and this year attracted 411 players to the Double Tree by Hilton Hotel (formerly the Burlington) in Dublin for the €2,250 buy-in Main Event.

Plenty of the players who attended the Irish Open Main Event had qualified online due to the potential for being the “Sole Survivor” and picking up a €50,000 bonus; and, when the “unofficial” final table was set, five of the nine remaining players (indicated by “SS”) were still in with a chance of adding the Sole Survivor bonus to their cash prize.

As the nine remaining players were led to their seats in a specially constructed boxing ring on the tournament floor, they were entering Level 28 (blinds 25,000/50,000 – ante 5,000). When play got underway, Liam Chevalier and Thomas O´Shea were the most active players on the table – Chevalier chipping up nicely when forcing Dave Pollock and Barry Donovan off of a valuable pot, but O´Shea taking a knock to his stack when his bluff was called by Patrick Clarke (5♣ 5♦) for a 600,000 chip pot.

Patrick Clarke then took over at the top of the chip counts when eliminating Antoine Smits in ninth place Q♥ Q♠ > 10♣ 10♠; and he extended his lead at the beginning of Level 29 (blinds 30,000/60,000 – ante 5,000) when forcing Barry Donovan out of another valuable pot with a 500,000 chips River bet. In an electric start for Clarke, he also knocked the last Englishman standing – Jonathan Lundy – when Lundy ran his A♣ K♠ into Clarke´s A♠ A♥.

Following Lundy´s elimination on eighth place, the pace of the game slowed a little. Thomas O´Shea managed to double up his short stack against Liam Chevalier A♥ Q♥ > J♣ 10♣, and Michael Gilligan was demoted to being the shortest-stacked player (albeit with fourteen big blinds) as the game entered Level 30 (blinds 40,000/80,000 – ante 5,000). Gilligan and Oliver Lynch both managed to get several shoves through to pick up the blinds and antes, and it was Barry Donovan – who had been second in chips at the time – who was to leave the table in seventh place.

Donovan´s exit came in the most significant hand of the Paddy Power Poker Irish Open to date, and it was a real cooler! Donovan had opened the betting by raising from UTG to 175,000 chips, and Patrick Clarke made the call from the Big Blind. Following the flop of J♣ 10♣ 9♣, Barry Donovan bet 230,000 chips, Patrick Clarke responded by raising to 515,000 chips and Donovan announced he was all-in for 2.5 million chips. Clarke had him covered by half a million chips and the cards were on their backs:

Despite having flopped a set of Tens, Patrick Clarke was only a marginal favourite to win the hand, as Barry Donovan would double-up into the chip lead with any King, Queen or Club. Unfortunately for Donovan the Turn (3♥) and River (4♠) were both brocks and he was bust in seventh place, while Patrick Clarke became the massive chip leader with 5.2 million of the 12.2 million chips in play as the game went six-handed.

Gilligan, Lynch and O’ Shea Bust – But After One Helluva Fight

The three shortest-stacked players were eventually eliminated from the Paddy Power Poker Irish Open, but only after putting up some strong resistance. Thomas O´Shea caught an Ace on the River to double up against Patrick Clarke A♥ K♦ > J♥ J♦, before Clarke sent Michael Gilligan to the ringside in sixth place A♣ 8♥ > Q♣ 10♣ – but only after surviving a scare on the flop of A♠ 6♣ 4♣.

All Change at the Top of the Leaderboard

Incredibly, Chevalier pulled himself into the chip lead when forcing Patrick Clarke and Dave Pollock out of big pots in consecutive hands and, as the three remaining players broke for dinner, the respective chip stacks looked like this:

When the three players returned from dinner, the blinds had increased to 60,000/120,000 (ante 10,000). Patrick Clarke chipped up a little with a rivered pair of Threes against Liam Chevalier, while Dave Pollock improved his chip stack with some uncontested shoves and then won three hands in a row – the last in a 1.5 million chip pot against Chevalier; after which Pollock had recovered to 3.9 million chips, Chevalier had dropped to 3.6 million chips, and Patrick Clarke was back in the chip lead with 4.7 million chips.

After a brief hiatus, Patrick Clarke was back to doing what he had done all day – knocking out contenders. Liam Chevalier was his next victim, running his 4♥ 4♣ into Clarke´s 8♣ 8♦ and failing to find another Four to stay alive in the Paddy Power Poker Irish Open – enabling Patrick Clarke to take a 8.37 million -v- 3.74 million chip advantage into the heads-up against Dave Pollock with blinds now at 80,000/160,000 (ante 20,000).

The early hands of the heads-up did not change the respective positions of the players very much. The majority of the hands were won with pre-flop shoves from Pollock or small post-flop bets from Clarke, and it was only when Patrick Clarke (J♥ 10♥) won a 975,000 chip pot with trip tens that it was safe to say he was in control of the climax to the Paddy Power poker Irish Open.

Soon after Dave Pollock lost the big hand against Patrick Clarke, he was out of the Paddy Power poker Irish Open. Pollock had limped in from the button with Q♠ 7♣ and Clarke (K♦ 8♦) checked in the Big Blind. Following the flop of 2♥ 7♠ K♠, Pollock raised to 350,000 chips, Clarke checked-raised to 800,000 chips and Pollock announced he was all-in. Patrick Clarke called and was way ahead with his top pair against Pollock´s second pair.

The four remaining online qualifiers who had made it to the final table each received a free entry into next year´s Irish Open Main Event as well as their respective prizes: