This year’s Latin American Poker Tour (LAPT) Poker Tour Main Event has been won by Patricio Rojas, who won $123,840 for his stellar play at the event. 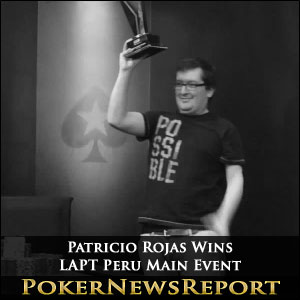 This year’s Latin American Poker Tour (LAPT) Poker Tour Main Event has been won by Patricio Rojas, who won $123,840 for his stellar play at the event.

Rojas bested a field of 557 en route to taking out top prize at the four-day event, of which the top 88 were in the money. In many ways, a win for Rojas was expected since the Chilean player had the chip lead at the start of the final table, but he certainly had some competition along the way.

Unfortunately for Menendez, it was not solid enough as Chauriye’s Aces held on the 9♣ 2♣ K♥ 7♥ J♠ board to win him the hand while knocking the Argentian out of the event in eighth place.

Next to go was local poker pro Carlos Noriega, who was knocked out of the tournament in seventh place after losing a showdown to Scott Diver. Noriega went all in before the flop with Q♥ 3♥ and was called by Diver, who was ahead with K♠ Q♣.

Diver stayed ahead on the J♥ 10♥ 2♦ flop, but Noriega had a flush draw to give him some hope and Diver some short-lived anxiety. The 10♣ did not provide , him with the flush, however, and nor did the 8♦ on the river. That meant Diver won the hand and Noriega was the second player to be eliminated from the final table.

Sixth place went to Russian player Andrey Spitsyn, who was eliminated from the event by Rafael Pardo. Spitsyn, who had 8♦ 8♣, moved all in before the flop and was called by the Colombian, who was in front with A♣ 7♠.

The flop did not go the Russian’s way, however, as the flop came A♦ 6♠ J♠, giving Pardo a higher pair. The 4♠ on the turn and 4♦ on the river did not help Spitsyn, and his time in the Main Event was over as a result.

Diver was the next player to go after he was knocked out from the final table by the eventual winner. The Canadian went all in before the flop with K♥ 9♣ and was behind Rojas, who called with A♥ K♦.

Both players flopped a pair after the flop came K♣ 7♠ 2♣. The 5♣ on the turn and Q♥ on the river kept Rojas and his higher kicker in front and Diver was eliminated from the event in fifth place as a result.

Rojas then got two final table scalps in a row after eliminating Chauriye from the event in fourth place. Chauriye showed A♥ 10♥ before the flop, while Rojas was ahead with J♠ J♣. The Jacks held on the {&c} 2♦ 6♠ 3♣ 3♠ board and he chipped himself a little more while the tournament went down to its final three players.

Third place in the Main Event went to Lay, who was the third straight victim of Rojas. Lay, who was short stacked, went all in before the flop with 6♣ 5♠ and was called by the eventual winner, who showed A♣ 5♣.

The flop came 2♣ 8♦ K♥, which was of no help whatsoever to Lay, and he needed something to happen on the turn and river to keep him in this tournament. That did not happen, however, as the Q♠ came on the turn and the 3♠ came on the river, giving Rojas the hands while ending Lay’s time in the event.

Lay’s elimination put Rojas and Pardo in heads-up play, with Rojas holding a commanding chip lead when play between the two began. Despite the differences in chip stacks, Pardo was experienced at the LAPT, with this event being his fourth ever LAPT final table.

Unfortunately for him, it meant little in the end, as Rojas’ stack and play was simply too good to be matched by even the best of poker players. He did his best though, but Pardo was never able to significantly boost his chip stack during heads-ip play.

In the last hand of the event, Pardo called pre flop, but Rojas raised to 420,000. After a few moments of contemplation, Pardo then reraised all in with A♣ 2♠ and was eventually called by Rojas, who had Pardo dominated with A♥ 10♣.

The 7♦ 4♣ J♠ flop kept Rojas in the lead, and he could probably smell victory with just two cards on the board to be shown. The Q♦ on the turn kept him ahead, and victory was even closer still.

The river showed 8♠, which confirmed Rojas as the LAPT Peru Main Event’s victor while Pardo had to settle for second place. It was a huge victory for Rojas, who became just the third Chilean to ever win an LAPT Main Event.