Michael Sneideman admitted that patience was the key to success in Event #10 of the Borgata Poker Open after collecting the $35,357 prize and winner´s trophy. 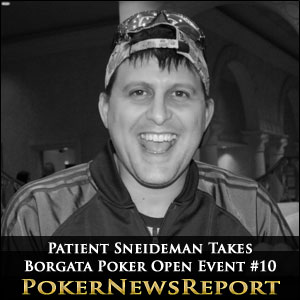 Michael Sneideman admitted that patience was the key to success in Event #10 of the Borgata Poker Open after collecting the $35,357 prize and winner´s trophy.

The tenth “Main Event” of the Borgata Fall Poker Open was a $660.00 buy-in two-day NL Hold´em re-entry tournament, which attracted 217 entries and created a prize pool of $130,200. The top 27 players cashed in the event and the bubble burst towards the end of Day 1 when Nancy Martin flopped the nut straight with K♠ J♠ against a player who had speculatively moved all-in with Eight-Nine.

It was almost three hours before the final table was set, by which time Jeff Wicker had taken over at the head of the leaderboard and Michael Sneideman had increased his stack to 254,000 chips, courtesy of an early double up and then busting the afore-mentioned Nancy Martin in seventeenth place.

Himmelbrand Moves Up into Lead

When play resumed at the final table of the Borgata Fall Poker Open Event #10, blinds were 6,000/12,000 with a 2,000 chip ante, and although Jeff Einsidler was the most perilously placed player, the “honour” of being the first player to depart from the table went to Nidal Crowley-Abdelhay.

Greg Himmelbrand was also responsible for the elimination of Jeff Einsidler half an hour later when Einsidler moved all-in with Ace-Deuce suited and Himmelbrand called with King-Ten suited. Himmelbrand came closest to completing his flush draw, but it was the King on the Turn which paired his hand and dispatched Einsidler to the rail in ninth place – Himmelbrand now the chip leader with 900,000 chips.

What Goes Up Must Come Down

Greg Himmelbrand´s collapse from chip leader to his elimination in eighth place was remarkable. He practically doubled Michael Sneideman when Sneideman (Ace-Five) fired on every street and was lucky to catch an Ace on the River to best Himmelbrand´s picture pair.

He then lost a stack of chips to Michael Bonita (who had previously doubled up against Michael Sneideman with pocket Aces), lost with pocket Nines to the Ace-Seven of Igor Skochilo, and the last of his chips went in with Ace-Six against the Jack-Nine (suited) of Luis Khoury – who rivered the Flush to bust Himmelbrand in eighth place.

Out in 8th after getting 3 and 5 outered in big pots then losing 99 < A7 and finally A6 < J9 for the rest. Back to back FTs but disappointed

Two quick eliminations followed Greg Himmelbrand´s elimination when Chris O´Hara ran his Ace-Nine into the pocket Aces of Jeff Wicker, and Jordan Ludwick lost a race with pocket Eights against Michael Bonita´s Ace-King, before a series of big pots the complexion of the tournament.

Michael Bonita doubled up with pocket Deuces against Jeff Wicker´s Ace-King and then crippled Luis Khoury when turning a King-high straight against Khoury´s missed flush draw. Michael Sneideman used his tight table image to take down some substantial pots from Wicker and Igor Skochilo, before Skochilo made a mini-recovery busting out Luis Khoury Ace-King > pocket Threes.

By the dinner break Michael Sneideman had built up a significant chip advantage:

Sneideman Wraps Up Event in Under an Hour

The post-dinner action happened quickly and the field was reduced to just two players after Michael Sneideman rivered trip Aces to bust Igor Skochilo in fourth, and his pocket Nines held against Jeff Wicker´s pocket Sixes to end Wicker´s participation in the tournament in third.

Michael Sneideman took a 3.6 million -v- 750,000 chip advantage into the heads-up against Michael Bonita, and wrapped up Event #10 of the Borgata Fall Poker Open within twenty minutes – Bonita moving all-in with Q♠ 10♥ and finding he was behind Michael Sneideman´s A♠ K♦.

The flop of A♥ J♥ 5♦ paired Sneideman´s Ace, but gave Bonita hope of a gutshot straight. The 4♥ on the Turn added the flush draw to list of possible outs that could prolong Michael Bonita´s tournament life, but the 5♠ on the River gave Michael Sneideman victory in the tournament and the $35,357 first prize.