Jae Kyung ‘Simba’ Sim took down the APPT Cebu Main Event in the Philippines last night for almost $100,000 after playing what he described as a patient game. 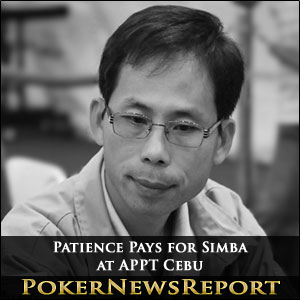 Jae Kyung ‘Simba’ Sim took down the APPT Cebu Main Event in the Philippines last night for almost $100,000 after playing what he described as a patient game.

Sim indeed had been patient during the penultimate day of the Asia Pacific Poker Tour Main Event in Cebu – starting the day in 24th position of the 25 players remaining and only creeping into the money courtesy of a double up A♦ 10♦ > A♥ 7♦ against Anthony Wright.

As Level 19 started (blinds 5,000/10,000 – ante 1,000) Sim continued his final table assault – taking chips from Anthony Wright, Daniel Spence and Jim Collopy before busting out Bawod Hyunshik Yun A♦ A♥ > A♣ K♦ to take the chip lead with over 1.5 million chips – almost half the chips in play.

Karlsson and Wright Emerge as Challengers

While Jae Kyung Sim was repeatedly doing damage to Jim Collopy´s chip stack (Collopy was coolered by Sim in a Full House over Trip Nines hand and then when Sim turned a Flush to best Collopy´s flopped set) Magnus Karlsson and Anthony Wright emerged as the biggest threats to Jae Kyung Sim´s final table superiority.

Magnus Karlsson chipped up to over 800,000 chips when eliminating Daniel Spence in fifth position (A♦ Q♠ > 8♦ 5♦), while Anthony Wright busted the recent WSOP APAC Pot Limit Omaha bracelet winner Jim Collopy in fourth place, when Collopy ran his Q♥ Q♠ into Spence´s A♥ A♠. However, now having two-thirds of the chips in play, Sim´s lead ultimately proved to be unassailable.

Sim´s Patience Runs Out and Luck Takes Over

After an eternity, during which few hands progressed beyond the flop, Jae Kyung Sim´s patience eventually took back seat as the players were about to reach the end of Level 23 (blinds 12,000/24,000 – ante 4,000). In the final hand before the break, Sim opened to 50,000 chips from the small blind, before being met with an all-in for 300,000 chips from Anthony Wright on the big blind.

Sim snap-called, and both players tabled their cards. Anthony Wright was at a slight advantage with 6♦ 6♣ against Jae Kyung Sim´s A♥ K♣, but the A♦ on the Turn gave Sim the top pair and eliminated Wright from The APPT Cebu Main Event in third.

With a 5:1 chip advantage, the heads-up between Jae Kyung Sim and Magnus Karlsson was only to last three hands; however the manner of Sim´s victory was a lucky flop rather than a masterclass in poker.

When the two players rolled over the cards, Jae Kyung Sim (8♦ 6♦) had flopped a straight and, with nothing on the turn or river to help Karlsson (10♠ 6♥), Jae Kyung ‘Simba’ Sim became the APPT Cebu Main Event Champion.

The currency used for the buy-in and prize money at the APPT Cebu Main Event was the Philippine Peso (PHP). At about 40 PHP to the dollar, Jae Kyung ‘Simba’ Sim´s prize for taking down the Main Event was a little under $100,000.