Andrey Pateychuk won the European Poker Tour San Remo Main Event last night in one of the most dramatic final tables ever witnessed in a live tournament. 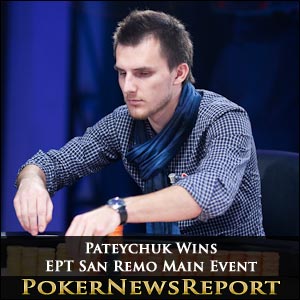 Russian poker player Andrey Pateychuk won the European Poker Tour San Remo Main Event last night in one of the most dramatic final tables ever witnessed in a live tournament.

During the climax to the six day event, any of the top four overnight chip leaders could have gone on to victory had the right card fallen at the right time, yet most of the support at the beginning of the day was for the four players with the least amount of chips.

As the players took their seats, Australian poker player Daniel Neilson was in a very strong position. Never out of the top two on the leaderboard, his chip stack was 50% larger than his nearest competitor – Bulgarian Dimitar Danchev – and more than twice the average. Following Neilson and Danchev were Slovakia´s Jan Bendik and Andrey Pateychuk, who had shown he was a fearless battler during the conclusion of Day 5 when he crushed sixth placed Yorane Kerignard and eliminated Italy´s great hopes – Alessio Isaia in 12th and Angelo Tarallo in 11th.

In fifth place overnight was UK legend, Barny Boatman, who had a vociferous support in San Remo and thousands of well wishers following his fortunes on Twitter. The two short-stacked players were probably the two best supported of all. Italian Rocco Palumbo had been responsible for the long time chip leader Chris McClung on Wednesday and was the last remaining hope of the home supporters, while Kevin MacPhee had taken over the role of chip leader until losing a massive pot to Dimitar Danchev and was the last remaining chance for a dual EPT Champion to be crowned at this event.

Short Stacks Tumble after a Battle

When play started MacPhee and Palumbo both had little over 20 big blinds each, but both stuck around long enough to give their supporters encouragement. It was after nearing two hours of play that MacPhee was the first to depart – shoving his last 535,000 chips from the big blind with 5♥ 6♠. Barny Boatman called and tabled Q♠ 7♠ and, with no scares on the board for the Englishman, MacPhee was eliminated in eighth. Rocco Palumbo lasted for another hour before taking too much of a chance with K♣ Q♠ and coming second to Jan Bendik´s flopped set of Fives. Palumbo finished in seventh.

Tighter at the Top and Then a New leader

Following Palumbo´s departure, the dynamics of the table began to change. First Neilson had his lead reduced by Andrey Pateychuk when the Russian doubled up with A♦ K♣ against Neilson´s A♣ 7♦ and then Dimitar Danchev eliminated Yorane Kerignard when his A♦ J♦ flopped trip Aces against the French player´s pocket Threes. Pateychuk then risked 4.5 million chips and his tournament life on A♠ K♣ to be called by Neilson (A♥ 9♦) who found his hand dominated for the second time in the same level. Having taken the chip lead, Pateychuk then extended his advantage by taking more than a million chips from Barny Boatman in an audacious shove and eliminating Jan Bendik with a flopped set of Jacks against Bendik´s K♣ 10♣.

With more than half the chips in play, Andrey Pateychuk completely bossed the final table through to the heads up. Taking out Barny Boatman in a Q♦ Q♣ -v- 3♣ 3♠ race, Pateychuk kept Neilson in subdued mode, and the only chance the Australian had to get back into the game was dashed when the board turned up a full house to wreck Neilson´s dominant A♠ 8♦ -v- K♦ 10♦ hand against the Russian. Eventually Neilson shoved with A♠ 5♦ and again had his ace-high hand dominated – this time by Dimitar Danchev´s A♥ 9♠. The only assistance on the board was provided for the Bulgarian, who hit a straight, and Neilson was gone in third.

Heads Up is a Fitting Climax

Prior to the start of the heads-up, the two remaining players struck a deal so that each was assured of €600,000, with the balance of €80,000 and the EPT San Remo title up for grabs. It looked a good deal for Danchev, who was entering the heads-up with an 11.4 million to 13.8 million chip deficit, but soon into the climax of the tournament he took the lead when his two pairs enabled him to capture a 10 million chip pot. Danchev increased his lead when his A♠ K♥ made a full house on the board to crack Pateychuk´s 9♠ 9♣ and, although Pateychuk was able to pull back with some aggressive betting to almost draw level, it looked all over for the Russian after the flop in the hand of the day.

Nearly all the 25 million chips in play were in the middle of the table when the 8♥ was revealed on the turn, making Pateychuk´s only hope of redemption a Five or Ten. Incredibly the 5♥ was dealt on the river, giving Pateychuk a runner-runner straight and a staggering chip advantage of 25:1. Inevitably the tournament was all over quickly, and three hands later Danchev´s K♠ Q♠ failed to connect against Pateychuk´s 7♦ 7♣ and the Russian became the new EPT San Remo Champion.