According to Senate Majority Leader Harry Reid it is looking unlikely that the online poker bill will be passed in the time remaining in Congress this year. 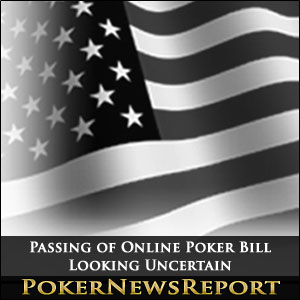 According to Senate Majority Leader, Harry Reid, it is looking unlikely that the online poker bill will be passed in the time remaining in Congress this year.

In the few days remaining in Congress this year, it is looking uncertain that the online poker bill will be passed. Senate Majority Leader, Harry Reid was unconvinced that there would be sufficient time to pass the bill despite the support that it has received.

Reid’s opinion comes even though key Senate Republicans have stated that they believe the bill can be advanced with the extra votes they have managed to secure.

Senator Jon Kyl has co-sponsored a draft bill with Reid that has not been formally introduced. Kyl stressed the need to represent the bill appropriately without trying to add it to other bills.

If it ever comes up in the Senate, and it’s offered in the inappropriate way – that is to say, not part of some bill that nobody is going to vote for – then there’s no question about Republican votes in my view, commented Kyl.

When Reid was questioned about his expectations for the bill for this year, he threw up his hands and said,

Everyone, listen to this. We suddenly have Republican votes on Internet poker, two weeks before Christmas. Without being vulgar, what the hell would I put it on?

The bill would not only legalize online poker, but would result in most other forms of online gambling being made illegal. This bill is a top priority for casinos in Nevada as they are beginning the process of preparing for changes in legislation that will allow them to enter the online gaming industry.