Pascal Lefrancois On Top of PCA Main Event after Day 2

French-Canadian player Pascal Lefrancois enjoyed a steady passage to the top of the leaderboard during Day 2 of the PokerStars Caribbean Adventure Main Event. 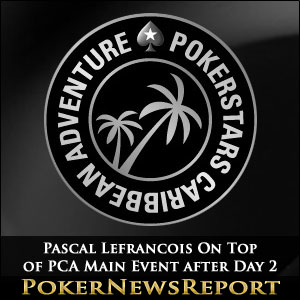 French-Canadian player Pascal Lefrancois enjoyed a steady passage to the top of the leaderboard during Day 2 of the PokerStars Caribbean Adventure Main Event.

Day 2 of the PCA Main Event was best described (by Jennifer Tilly) as “#swingy”. The day started with 628 survivors from the two opening flights and 26 late entries but, five levels of action later, 439 of those players had been sent to the rail (including Tilly), and only 215 players remain in the tournament.

Leading the chip counts at the close of play was Pascal Lefrancois, who amassed 412,000 chips without getting involved in any spectacular hands or ever putting his tournament life at risk. Lefrancois holds a five Big Blind advantage over Sam Greenwood (402,500 chips), with a larger gap to third-placed Matthew Berkey (372,100 chips).

While Lefrancois may not have had a #swingy day, several other players did – particularly top female poker player Lily Kiletto. Kiletto had started the day with an above-average stack of 84,400 chips, and took the chip lead in the tournament when busting Mustapha Kanit J♠ J♦ > A♥ K♥. However, big losses against Ben Zamani (A♣ 9♦ > K♥ 7♣) and 2012 PCA Main Event champion John Dibella saw Kiletto´s stack disintegrate. A failed bluff against Myro Garcia 9♥ 8♥ < 10♥ 10♠ reduced Kiletto´s stack to 60,000 chips, which went in the direction of Roger Teska in the final hand of the night.

PokerStars Pro Isaac Haxton also had a #swingy day – starting the day with just 2.5 big blinds; but a triple-up with A♦ K♦ against Fedor Holz (Q♣ 8♣) and Matthew Fox (A♥ Q♥), and then a double up with K♦ K♠ > A♠ 10♣ saw him reached the relative safety of 15,500 chips. A loss of half his stack and then another double-up saw Haxton survive until the last level of the night – when he eventually succumbed to the rising blinds and was bust from the event in an unrecorded hand.

Among the other sponsored professionals that hit the rail during the day was Eugene Katchalov – but not before he had done the rest of the field a favour by busting out the German duo of Dominik Nitsche and Philipp Gruissem in a three way pot which saw Katchalov´s A♠ A♦ hold against Nitche´s 8♠ 8♦ and Gruissem´s 9♣ 9♦. We also lost Daniel Negreanu (K♣ J♣ < Andrew Chen´s A♣ 8♣) and three former WSOP Main Event winners – Chris Moneymaker, Joe Cada and Jonathan Duhamel.

It was a better #swingy day however for Jason Mercier – who started the day with just 15,400 chips and, at one point, had increased his stack to 142,000 chips before bagging and tagging 43,800 chips – while Liv Boeree looks like making a deep run in the PCA Main Event courtesy of a double-up against Eugene Todd A♣ A♥ > A♠ Q♠. It should also be noted that Vanessa Selbst is quietly moving up the leaderboard, and finished the day as the highest ranked PokerStars-sponsored player with 251,000 chips.

Looking Ahead to Day 3 of the PCA Main Event

When the 215 players who remain in the PCA Main Event take their seats this afternoon, play will be entering Level 14 (blinds 12,000/24,000 – ante 3,000). Five more 75-minute levels are scheduled for today, during which time the money bubble is likely to burst should sixty-four players get eliminated.

Chip leader Pascal Lefrancois will be hoping to safely negotiate a tricky looking table draw (he has the well-stacked Bobby Oboodi and Leo Margets for company), while table 23 look to be the one to follow; with the aggressive Sergio Aido sandwiched between Keven Stammen and Loni Harwood, with George Danzer having position on all three!