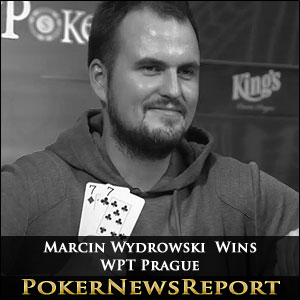 The recent PartyPoker WPT Prague main event was won by Wydrowski, who became the first Pole to ever win a major WPT event and bringing lots of pride to his country in the process.  Wydrowski cleared a field of 567 contestants in the weekend event to face a final table consisting of six players altogether.

The 26 year old Wydrowski won $423,957 from a total prize pool of $1.6 million in the WPT Prague Main Event, which took place at the King’s Casino in the Czech capital.  He also won a seat to the World Poker Tour World Championships, scheduled to take place at the Bellagio in Las Vegas next year – a prize worth $25,000.

I didn’t even look at the prize money for the other places, I only wanted first, said a thrilled Wydrowski after his win. Winning a major title was always my goal – I am so happy it is hard to understand how I feel at the moment.

The main event began with PartyPoker pro Bodo Sbrzesny coming in with a chip lead, and the first to be eliminated was Alin Grasi.  Next to leave the final table was Michael Galiano, followed by Tony Chang who was taken down by the Russian Alexander Lahkov.  Despite his chip lead, Sbrzesny only lasted until third place, leaving the heads up status to Lahkov and Wydrowski.

Wydrowski took a 3:1 chip lead at this stage of the game before he managed to beat the German Lahkov with 7-7 vs 7-6.

The payouts on the final table of the World Poker Tour Prague Main Event were as follows: