Reports of a software glitch at PartyPoker that is causing player screen names and hole cards to change in the middle of hands in play is being investigated. 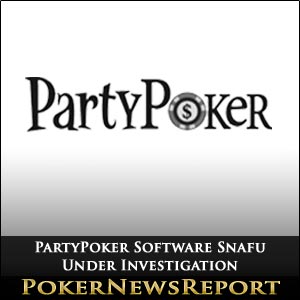 Reports of a software glitch at PartyPoker that is causing player screen names and hole cards to change in the middle of hands in play is being investigated.

A few players have reported on online poker forums that they have looked at two hole cards during the course of the hand only to have two new hole cards appear at the showdown stage. Obviously, this software snafu is resulting in players’ betting on what they perceive to be a winning hand and then a switch of the cards can end up as a losing hand.

The problem first surfaced roughly one month ago on a German PokerStrategy thread when a player revealed proof via video of player screen names changing mid-hand, according to pokerfuse. Other players corroborated the glitch by showing hole cards changing.

Apparently, the problem was first believed to have occured only to players who were using Hold’em Manager 2 poker tracking software. But recent posters have stated that the card switch has happened to them without employing such tracking software. A TwoPlusTwo forum thread earlier this week popped up with more players commenting on the matter. A PartyPoker representative responded to the thread by posting that the problem occurred some months ago now and to our knowledge has not reoccurred since. But the same spokesperson added yesterday that software experts at the PartyPoker site are aware of the issue.

To be fair, it is not entirely clear how many times the card switch has come into play. But PartyPoker has now launched an investigation in an effort to resolve the issue.

This has been escalated to the highest possible level within the business, the PartyPoker representative said. To date we have had very few reports of the issue directly to our customer service team. However, we continue to investigate all possible avenues including the influence of third-party [software].

PartyPoker currently sits in second place in online poker traffic rankings according to PokerScout. Its player pool should increase considerably when players from the Bwin poker skin on the Ongame network migrate to PartyPoker in the near future as is planned by Bwin.party. Industry observers are anxious to see if Full Tilt can regain its pre-Black Friday hold on second place in player traffic after its scheduled relaunch on Nov. 6 under the ownership of PokerStars.