For the next 18 days, players on PartyPoker’s New Jersey site can play for big prizes without putting up serious cash. 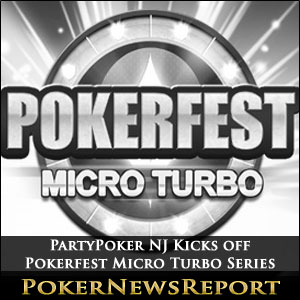 For the next 18 days, players on PartyPoker’s New Jersey site can play for big prizes without putting up serious cash.

Nearly two months after rolling out its New Jersey based online poker site, the state’s market leader is launching its first official tournament series. The aptly titled Pokerfest Micro Turbo got underway on January 16th and will run until Groundhog Day, February 2nd. During that time, Partypoker NJ will offer 50 exclusive small stakes events with buy-ins ranging from $0.50 up to $10.

As the name also implies, all tournaments will be of the turbo variety.

Every tournament on the schedule is a guarantee, meaning that a minimum tournament prize pool is allocated prior to the tournament’s start. That could bode well for the Garden State’s tournament enthusiasts, as many NJ sites are failing to hit their guarantees – including the first couple Pokerfest events.

Case in point, Pokerfest #1: $250 6-max $250 Ante-Up turbo only drew 115 runners – amounting to a $146.50 overlay.  Pokerfest #2 fared slightly even worse, missing the mark by nearly $350. It’s not yet known whether this unfavorable trend will continue, but certainly the fact that BorgataPoker.com – which shares liquidity with Party – is not allowing its faithful to sign up for Pokerfest events is hurting.

The good is that Pokerfest caters to fans of alternative tournament formats, as the schedule features several Stud, PLO and O8 tournaments. Bounties and rebuys are also common fare.

And in true PartyPoker fashion, there are three missions solely dedicated to Pokerfest. The “Easy” version tasks players with participating in a tournament in five consecutive days, knocking out 5 opponents from tournaments and tripling their stack in a single hand. Missions reward players with tournament dollars proportionate to the difficult of the objectives.

Pokerfest Micro Turbo will culminate in a $10,000 deep stack turbo event on Feb. 2, the entry for which is only $10. The tournament series is running parallel to Borgata’s Winter Poker Open, which kicked off on January 14th, with the ideal that players will play online when not grinding it out in an event. According to Team partypoker’s Scott Baustein:

I’m spending most of late January grinding live at the WPT Borgata Winter Poker Open. If I bust a live event I can play online and Pokerfest is ideal.