The race for market share in New Jersey’s online poker and gambling regime is underway as PartyPoker announced a $50k guaranteed tournament this Sunday. 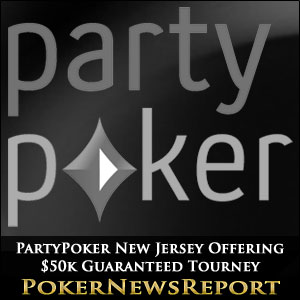 The race for market share in New Jersey’s online poker and gambling regime is underway as PartyPoker announced a $50k guaranteed tournament this Sunday.

A $200 buy-in with at least a $50,000 prize pool will commence at 7:30 ET on Sunday at nj.partypoker.com, putting a nice finishing touch on what is for many a four-day Thanksgiving holiday weekend. Players within New Jersey can buy-in directly for $200 or aim to qualify for as little as 10 cents ($0.10) in satellites that are running now.

Poker Hall of Famer Mike Sexton, who is a Team PartyPoker founding father, said the newly-regulated website is making sure that New Jersey poker players “will not find better value anywhere else this weekend” as the holiday winds down. The tournament will be the richest ever hosted by a legal New Jersey online poker website.

The Garden State’s hard launch kicked off Tuesday and early numbers reveal that PartyPoker’s offering has taken the lead in market share among the poker sites made available by six of Atlantic City’s 12 casinos. While the five-day soft launch that commenced on Nov. 21 was fraught with geolocation glitches, the New Jersey Division of Gaming Enforcement has indicated that those issues have improved considerably since the Nov. 26 hard launch.

While the $50k guaranteed tournament on Sunday, December 1 may likely offer tremendous value in the form of an overlay, PartyPoker wants players in New Jersey to know that a full range of tournaments will be hosted at the site on a daily basis. Players of various skill levels and budgets are welcome to log on and play, the only requirements being of legal age to gamble and the need to be physically located within the state.

However, that is expected to change in coming months, as interstate compacts with Delaware and Nevada may be in the cards. Add to that some other states eventually enacting online poker and gambling legislation and a new online poker boom may soon be realized in the U.S.